FORT KNOX, Ky. –  5th Regiment, Basic Camp Cadets took a walk in Keyes Park, refitted into a tent city, as they weigh their career options for when they commission as second lieutenants. 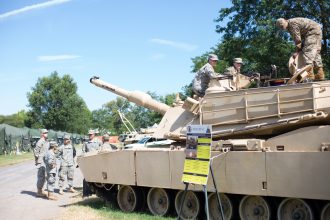 Cadets explore  a tank after learning more about the Armor Branch of the US Army at Keyes Park, Fort Knox, Ky. July 19, 2018. Photos by Dustin Massengill.

The beautiful, sunny weather was perfect to allow the Cadets to decompress and focus on the their futures with the US Military. Cadets consider options like the Engineer Corps, the Field Artillery branch, the Chemical Corps and the Signal Corps.

Capt. Mia Williams, nurse counselor for Cadet Command, talked with Cadets about the differences between choosing active duty or the reserves, highlighting it is important to consider what is going to make them happy.

“The lifestyle of an active duty member is completely different from a reservist,” she said. 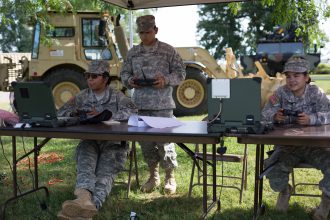 Williams says that some Cadets, like those interested in the medical field, know exactly what they want to do, but it is also very common to be confused and unsure about where they want to end up.

Cadet Erica Rozenbom, University of Southern Indiana, was undecided when arriving at branch orientation, but is glad she was given the experience.

“It has definitely cleared up some questions that I had,” she said, “and shown me what I want for my future.”

Cadet Nicholas Walden, University of California, Riverside, said after visiting the Quartermasters briefing he knew where he wanted to go. 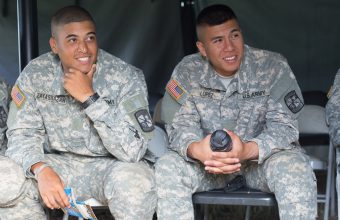 “Being in charge of logistics and supply chains that affect thousands of people just seems like a pretty solid deal.”

“I’ve been around computers my whole life,” she started. “I just go around technology and I have a natural kick to it and this is something I can really see myself doing.”

These Basic Camp Cadets will have plenty of time to learn more about different branches before they commission, but opportunities like this give them a single place where they can review multiple options. To learn more about the officer positions in these branches and more go to the Go Army website.