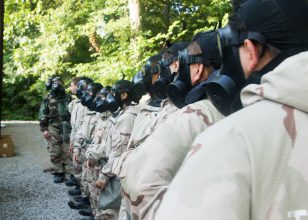 Cadets put the upmost faith in not only their equipment, but also each other and their Cadre while tackling the CS gas in the CBRN Chamber.

Chaplain Victor Matos decided to enter CBRN and feel the effects of the CS gas alongside the Cadets to boost morale within the platoon and motivate them to enter the chamber. 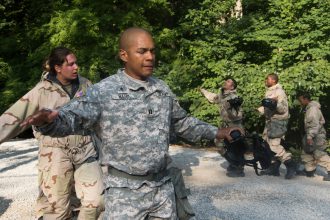 “As a Chaplain, you have to go through what the Cadets go through as well and that is one way to realize the impact of what they are going through, and also a way to earn their trust and respect.”

He continued to explain that Cadets feel more motivated when they see their Cadre participating in training alongside them.

“While in the chamber, I clap with them, for them, dance with them, and also stood by them as they count off,” he explains, “So my presence hopefully will be of comfort in their struggle if you will.” 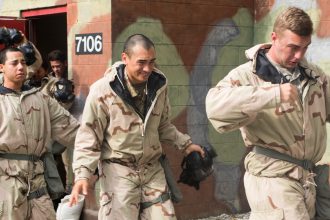 The CBRN Chamber is physically and mentally challenging training for Cadets, having extra comfort and motivation from each other and their Cadre can make a large difference in the outcome of the event.

Cadet Zach Kraus explains how it feels to be a Cadet going through CST and be able to experience training events while their Cadre is going through it with them.

“I think it’s very inspirational you know, they’ve been through this plenty of times themselves and for them to just go in and get us through the experience, that raises our morale even further.” 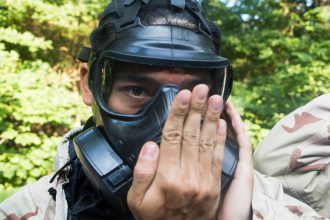 Many cheers and shouts were heard from Kraus’s platoon prior to participating in the CBRN chamber, he explains how his platoon keeps morale high before taking on the CS gas.

“Once we’re in there we try to keep that morale maintained and look out for one another,” he continues, “When we were exiting the gas chamber, we kept our arms on each other’s shoulders to hold each other up so none of us fall back and watch over each other.”