FORT KNOX, Ky.—6th Regiment, Advanced Camp puts their skills to the test at the largest part of their training here at Fort Knox: Field Training Exercises. 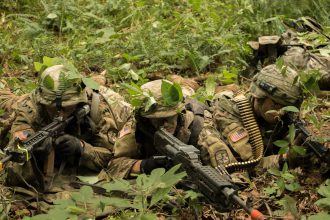 6th Regiment, Advanced Camp conducts Field Training Exercises where their skills up to this point in their training are tested in fluid training missions. Fort Knox, Ky. July 20, 2018. (Photo by Amber Vincent)

The FTX is the largest part of the training Cadets take part in during their time at Cadet Summer Training. The FTX is designed to be the “run” stage of their tactical knowledge. Prior to coming to the FTX, they complete the crawl and walk phases at the STX Lanes.

“As the platoon leader, it was my job to lead them to the contact of the enemy. I think we successfully completed that mission today,” stated Cadet Peter Maki, Minnesota State University—Mankato.

6th Regiment, Advanced Camp conducts Field Training Exercises where their skills up to this point in their training are tested in fluid training missions. Fort Knox, Ky. July 20, 2018. (Photo by Amber Vincent)

During FTX, the importance of communication is highly stressed by Cadre and Cadets alike. “Communication is vital to get everyone in the same mindset and moving as one unit,” said Maki.

Even though communication is highly stressed, things don’t always go according to plan, or as 6th Regiment was told, you have a plan until you get punched in the face, that’s when things start to go wrong.

During their movement to contact, Maki’s platoon overshot the enemy objective. This caused half the platoon to be on one side of the linear danger area and the other half of the platoon on the other side with the enemy in the middle.

This quickly caused a few minor issues, but Maki and his platoon managed to think quickly and get everyone back on the same page.

“When plans don’t go the way they’re supposed to you have to think quickly to get it back on track,” commented Maki.

Revert Back to the Basics: Weapons Group Zero—1st Regiment, A Company