FORT KNOX, Ky. – As the Cadets of 4thRegiment, Basic Camp are reunited with their friends and family members and reflect on their time at Cadet Summer Training, one Cadet in particular reminds us of the true meaning of staying humble. 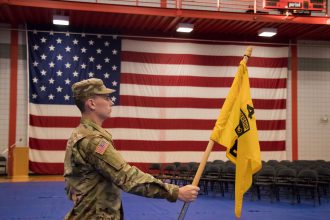 Out of the nearly 200 Cadets present at Saturday’s graduation, Kinsey, from Clark Atlanta University, was presented with the Armed Forces Bank Performance Award. This prestigious award is given to the Cadet who best demonstrates respect for other cultures and people by effectively utilizing the training scenarios to gain a better understanding of cross-cultural competencies as they relate to a complex environment.

“It was awarded to me based on the respect I have for others,” said Kinsey. “The biggest lesson I learned here was that in order to be a leader, you have to be a follower first.” 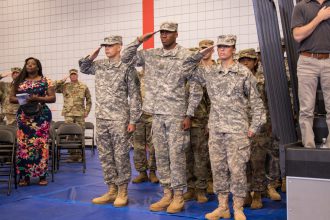 “I can’t be a leader if I don’t follow. If I’m not in the shoes of my soldiers or my battle buddies, I can’t relate to them or understand them.”

When asked about his favorite part of CST, Kinsey couldn’t help but smile.

“My favorite part of camp was more towards the end when me and my platoon and battle buddies started forming a family,” beamed Kinsey. “Now I have an Army family.”

As Kinsey stood ahead of his fellow Cadets, recognized for his accomplishments and respect for others, Kinsey noticed a familiar face in the crowd.

Kimberly Mason, the mother of Kinsey’s girlfriend, sat amongst the many faces that came to Fort Knox to support their Cadets.

“My mom passed away three years ago,” said Kinsey. “After my mom passed, she stepped in for me and filled the void.”

“I love her daughter completely, but I think I love her more,” laughed Kinsey.

As the last few notes of the Army Song played and the Cadets of 4thRegiment, Basic Camp were dismissed, Mason and Kinsey embraced for the first time in over a month.

“I am so proud of him – I wouldn’t miss this for the world,” said Mason. “He’s my daughter’s boyfriend, but he’s also my son.”

In helping to raise Kinsey, Mason has provided both spiritual and emotional support while insisting that he always remain compassionate and humble.

“I could never try to step into the place of his mother,” admitted Mason. “I’ve given him Godly advice, regular advice and I’ve fussed at him, but I’m so proud of him.”

As both Mason and Kinsey prepare for their journey home, Kinsey had this advice for incoming Cadets or those considering ROTC:

“I would say believe in yourself even when you think you can’t do it. Have faith, take action. As soon as you take action, the rest is yours.”