FORT KNOX, Ky. – Competition; the ability to measure your skills against those of your peers’. For the Cadets of 7th Regiment, Basic Camp, today was all about competition as they raced the clock in order to find the fastest male and female Cadets. Their challenge was not only with one another, but also against Beaudoin, the most physically demanding obstacle course they will see during their time at Basic Camp. 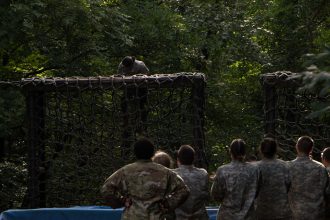 Cadets of 7th Regiment, Basic Camp getting down and dirty during their time at the Beaudoin Obstacle Course. Cadet Summer Training 2018 (Fort Knox, Ky. July 21) Photos by: Jakob Coombes

The day promised a few things; this group of Cadets were going to get dirty, sweaty, and physically drained as they maneuvered through the taxing obstacles. One by one, each challenge was going to take a little more out of them until finally…the Cadets find themselves out of breath, weak in the knees, and struggling to lift their own body weight. If the course wasn’t challenging enough, there was now the added pressure of representing your platoon in front of the entire Regiment.

The Cadets each made run throughs of the course as Cadre looked on with pen and paper in hand. The Cadre were almost as equally invested in the competition. If one of their platoon’s Cadet won, that meant bragging rights among the other Cadre members and if there’s one thing they like to do, it’s boast to both Cadets and Cadre alike. Once every Cadet had made it through the course, it was then time to choose those lucky two to represent the platoon. 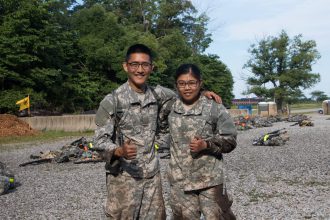 Cadet Christian Lee, Texas A&M University, gave some insight after representing 1st platoon in a blistering 2:02.38 run saying, “It’s a team effort. When you get tired you have your whole platoon running along side you, cheering you on.” Lee’s time would go on to become the fastest in the Regiment.

The competition brought out both a strong-will to win and an atmosphere filled with bonding and laughter. All teams fought hard and managed to overcome the difficult obstacle course multiple times. Even when they were so tired that their runs turned to trots, they still managed to drive on and were rewarded with cheers and admiration from their platoon members and Cadre.

In difficult situations like today when the Cadets are both mentally and physically exhausted, nothing seems to be falling their way, and they have an entire group of people depending on them, they always manage to appear calm and collected. The Cadets are almost unfazed by the pressure and responsibilities; instead, welcoming them like an old friend. This group of Cadets saw an opportunity to accomplish something for not just themselves, but for their entire team as well. The time spent at Beaudoin will forever stay a part of these Cadets’ memories when looking back at their month at Cadet Summer Training 2018.

“His palms are sweaty, knees weak, arms are heavy…He’s nervous, but on the surface, he looks calm and ready.”