FORT KNOX, Ky – Finding their way through the forests of Fort Knox, Cadets from 7th Regiment, Basic Camp learned the fundamentals of Land Navigation, or Land Nav. for short,  on the night of July 17, 2018. 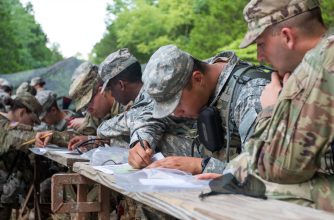 “At the basic camp level, it’s just exposure to some of the techniques of how to navigate during the day and at night,” explained Cpt. Javier De La Torre. “If they can do it at night, they can pretty much do it during the day.”

At the beginning of their time at camp, the Cadets were taught the theory behind Land Navigation, including plotting points, understanding a military map, and working a compass. Those lessons were reinforced by the Land Navigation exercises that they do twice: once in the daytime and once at night.

In small groups, Cadets received a map and used their knowledge and tools to plot points. They were allowed to use the following tools: a map, a pencil, a protractor, a compass, and a red-lense flashlight.

“It’s good to know terrain association, but it’s also equally important to know your pace counts and all the other basics of Land Nav,” continued Cpt. De La Torre. 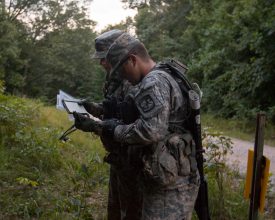 A pair of Cadets form 7th Regiment, Basic Camp head in to the forests to search for their points during Night Land Navigation July 17, 2018. Photo By: KirstyAnn Cole

Terrain Association is using what you see around you to understand the environment you’re in. This, however, was hindered by the absence of light, forcing Cadets to rely on their planning, pace counts, and battle buddies.

“One thing they tell us, and it has actually has for me today, is trust yourself,” revealed Cadet Erica Harris, University of Arkansas. “You’ve done the work beforehand, just trust that you’ve done it right. You and your battle buddy have double checked each others’ work. As long as you’re confident in the direction that your going, you’re going to find your point.”

Confidence is often what these Cadets lack. Cadet Marquiton “Skittles” Page, South Carolina State University expressed feelings of fear of what was ahead of him in the darkness of the forest.

“Everythings seems so different at night than daytime,” he described.

“Well, I’m actually afraid of the dark, so that put a bummer on things, [but] I trusted my battle buddy,” she stated. “She’s a little bit more experienced than I am. I’ve put my faith in her to know what she’s doing.” 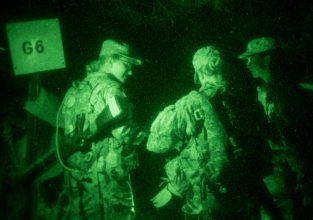 No matter how they did or felt about the exercise, Land Navigation is an essential part of a soldier’s training because they’ll never know when they’ll need it.

Where ever these Cadets go in life and in the Army, this training will serve them well. This is why Cpt. De La Torre gave the following advice to the Cadets:

“Whether or not [you] knock it out of the park and get every point or [you] get zero out of four during the day and zero out of three at night, take whatever experience you come away with here and get better”