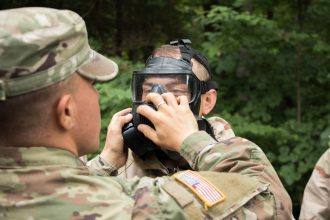 CBRN confidence training is where Cadets learn about MOPP gear and then they go through the gas chamber.

Once inside the chamber, Cadets are lead through a little bit of PT. Once this is completed, Cadre inside of the chamber come to each Cadet where the Cadet will remove their mask, state their name, university, and then sing. Once the Cadre determine that the Cadet is good to go, the Cadet has to then reseal their mask.

After every Cadet has been checked that they can all reseal their mask under pressure, Cadre members line up the Cadets in a circle and Cadets place their right hand on the shoulder of the Cadet in front of them, then they demask, and start running about six or seven laps around the chamber while singing, chanting or calling cadence.

But for 9th Regiment, the running and singing was a little bit different. The first platoon to go through the chamber this morning had a birthday, and not just any birthday, they had a 21st birthday. 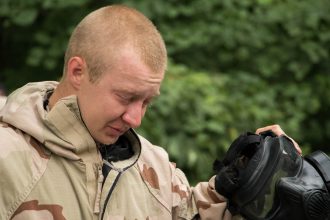 When asked about how he spent his 21st birthday versus how people normally spend their 21st birthday Cadet Buchanan Waller, Marquette University, said this, “I would recommend going through CBRN on your 21st. I thought it was better than having a drink.”

During an event like CBRN, its vital to maintain morale so that all Cadets complete the event and that no one is left behind or panicking.

“Even though we ran some extra laps, I think we were all pumped up that it was his birthday, everyone was feeling good,” commented Cadet Max Croteau, University of New Hampshire. “It brings everyone together, you’re only as strong as your weakest link.”

On the same page