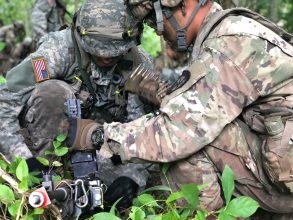 Cadets huddle around their Cadre as they learn about tactical exercises. Capt. Francisco Ramirez, State University of New York, works closely with this group of Cadets and guides them on the proper ways to set up and run their missions.

According to Ramirez the training gives Cadets from different programs, with different levels of support, a standard way of doing missions.

“I try and go step by step,” Ramirez said “that way everybody has the exact same information.”

The training consists of three steps. The crawl phase which is the main phase the Cadets worked in and then a walk and run phase.

This crawl phase is a very rigged and process based training. The Cadets receive specific instructions from their Cadre and also receive on the spot pointers and corrections. As they progress upwards they will receive less feedback, until they are independent.

Cadet Carter Brown, Purdue University, says the early field exercises can be slow but that he is excited for the pace to pick up.

“We are moving into the section where they give use a little more leeway to do as we please,” Brown said. ” To get to the part of the training where we can show what we have been learning for the past three years is a very exciting experience.” 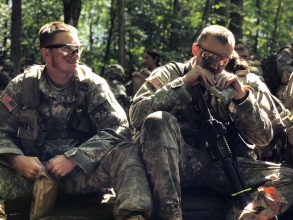 In the earliest stages, like this one, the Cadets don’t fire their weapons, instead they sound off with ‘bang, bang’ or ‘240, 240’. According to Cadet Athena Blair, Clemson University, the Platoon Leader for this mission the says it allows them to focus on the motions and tactical aspects without the noise of war.

“Because this is still a training environment,” Blair said, “this allows to know what going on and hear everything before we do it full battle-rattle in our next FTX [Field Training Exercise].

In three days the will move into a more rigorous training and in six days they will be expected to function autonomously in the most intense field training Cadet Summer Training has to offer.

Get ready to lock n’ load