The Chief of Staff Visits CST

When he first arrived, Milley visited 2nd Platoon’s patrol base as they prepared for an ambush. He took a moment to speak with them, watch them strategize, and give them coins. 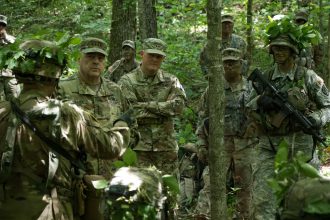 The Chief of Staff of the Army, Gen. Mark Milley, speaks with 6th Regiment, Advanced Camp Cadets prior to their Field Training Exercise at Fort Knox, Ky. July 18, 2018. Photo By: Amanda Surmeirer

Milley then traveled to the ambush site. There, he watched their plan unfold.

As four individuals from the opposing force appeared, shots erupted. Milley moved in towards the action to gain a closer perspective on how the Cadets moved and communicated.

“That process that you’re learning on a simple patrol, here in the woods of Fort Knox, Kentucky, if you apply it, internalize it, you think it through, that’ll stay with you for your whole life,” Milley explained to the Cadets.

At the After Action Review, Cadets discussed what happened during the mission: successes, failures, improvements to make, and tactics to sustain.

In each field training exercise, Cadets have an opportunity to learn and improve themselves to become better leaders and teammates. Soon these Cadets will be using their experiences to lead fellow Soldiers and serve the country.

“You’re doing something important,” Milley asserted. “You’re a very, very small percentage of the American people that have decided that you would volunteer, raise your right hand, and at some point here in the next year, when you get commissioned, you’ll swear an oath of allegiance to the constitution. Not many Americans are doing that.” 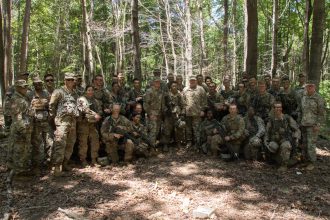 Their commitment to training and becoming an Army officer shows the heart of the Cadets. They are choosing to protect and defend the freedom of millions of people they will never meet, a choice that thousands of Soldiers before them have also made.

For these Advanced Camp Cadets, Milley’s words hit home as they are one step closer to swearing that oath on their lives and becoming the future of the Army.

Towards the end of his visit, Milley witnessed Basic Camp Cadets taking on an ambush as one of their first experiences working in the field. Milley took the chance, following the attack,  to talk with the Cadets about their decision to join the Army and hand out coins to those who could answer small trivia questions.

“This is where it all begins,” he told the Cadets. “The stuff you’re learning right here, just on this little ambush. This should stay with you the rest of your life.”