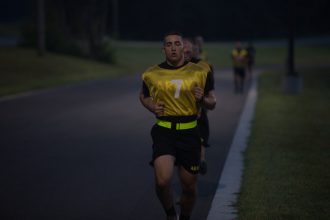 The APFT is a combination of a ritualistic  exercise mixed with the urgency and anxiety related to any must pass test. Nervous and droopy eyed Cadets lined up to begin the exam at 5:00 am.

A future lieutenant must successfully meet Army standards on two minutes of push ups and sit ups and then a two-mile run.

The standards set by the Army are just a base goal according to Cadet Lilliana Martinez, University of New Mexico. 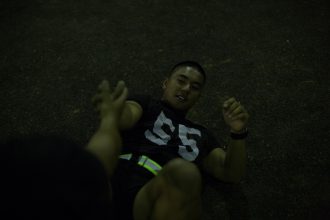 A Cadet reaches for a hand after participating in the Army Physcial Fitness Test at Fort Knox, Ky. July 23, 2018. Photo by Dustin Massengill.

“It’s a mental exercise, physical at the same time,” said Rich. “You have to have the right state of mind, and you’ll be able to knock it out.”

Cadets and Cadre whispered and shouted words of encouragement throughout the exam, commanding Cadets continue to ‘push forward’ or ‘keep going’. The test is scored on a 0-300 point scale, 100 points per event, and must score at least 60 in each category.

The inspiration and support took to new heights when the two-mile run started. The Cadets that completed the run first would return to the tail of the group and encourage their battle buddies and help them keep pace.

Those unable to support the end of the run waited at the finish line, shouting and ready to help those in need stretch.

Well done Cadets; Chapter is over