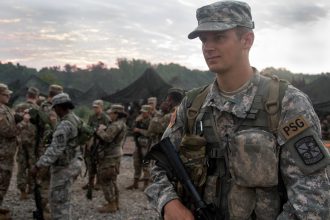 “We all have a compass, a protractor and a map of the area and they’ll basically give us a card with four points,” said Platoon Sergeant, Cadet Nathanial Gafford from Liberty University. “With that, we’ll have to plot our points on the map… navigate where we’re going, utilize azimuths and successfully find our way around here.” 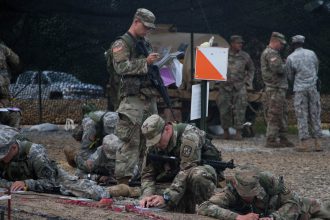 Walking the length of the course takes 45 minutes on average, meaning these Cadets walk many miles in pursuit of the orange and white poles marking their points. Since it can be easy to get lost, each Cadet is issued a GPS tracker to make sure everyone is accounted for at the end of the training.

“The points are not super far apart, but they are definitely far enough apart that if you are not paying attention to where you are or if you are not actively tracking your location, you will get lost,” said Cadet Rayna Miranda from the New Mexico Military Institute.  “So I’m just going to try to focus on exactly where I am at all times.” 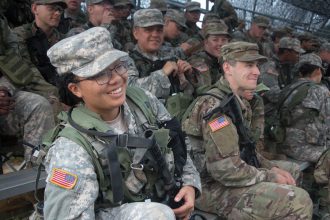 For Cadets living in urban or rather bare areas, Land Navigation in Kentucky may come as a surprise. Kentucky’s terrain is very diverse. While much of the land is flat, wooded areas cover the majority of the course. In addition, the Midwestern humidity provides the threat of heat casualties for Cadets used to dry, cool areas.

Land Navigation is one of the most important tasks for Cadets throughout their training. Not only does it teach navigation skills, it also teaches these Cadets how to become future leaders. “As a leader, you are going to have to take your units to places based on very little information or limited tools, in this case, a map and compass, and if you do not have that skill, you can not lead anybody,” said Captain Evan Adams from University of Texas at Arlington. 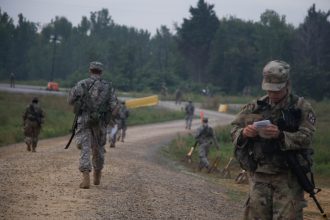 Since the course is a must-pass event, nerves were high. Recent graduate of University of Dubuque Iowa and commissioned 2nd Lt. Jordan Hamling shared his advice one year after his completion of Advanced Camp, “This is 90% mental, 10% physical. Just keep going. Your feet are going to hurt, you’re going to have blisters but just keep going and pushing forward.”