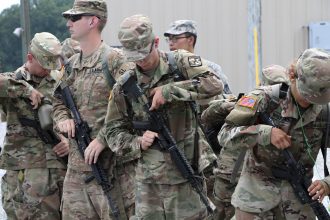 Fort Knox, KY- With the sun beaming down on George Blair Range, Cadets of Delta Company, 10th Regiment, Advanced Camp are prepared to qualify with their M4s, on the afternoon of July 24.

Qualifications with the air cooled, gas operated and magazine fed rifles consists of Cadets shooting pop-up targets that range from 25 to 300 meters. Cadets are given 2 out of 3 sets of 40 rounds worth of ammo to practice their shooting techniques. 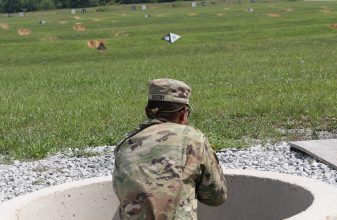 A Cadet in a foxhole aims at the 25 meter target . Photo by Gia Cruz.

In the prone supported, prone unsupported positions and the kneeling positions inside of a foxhole, Cadets start using their breathing, aiming and trigger squeeze techniques to shoot as many targets possible.

With a 3rd set of 40 rounds of 5.56 ammo, Cadets are challenged to have 36 out of 40 of their rounds hit the targets to qualify as experts and continue to compete in the RECONDO event.

Olivia Flannery, University of Iowa, expressed how she and her battle buddies were prepared to finally have some trigger time with their weapons. “Yesterday we zeroed and did the paper targets, it was more of a familiarization.”

“I wish I were more confident,” Flannery commented. “I’ve done this before, and I know what’s coming, I don’t know why I get so nervous.” She also added that she will tell her battle buddies back at home to practice because this is something that is essential to know, especially as future officers.

Krissy Robles, University of New York awaited her turn to qualify with no worries. The 6-year prior enlisted soldier stated that the Army has been her life and she is ready to lead soldiers. “I will use proper eyesight, steady breathing and scan my spectrum,” Robles said as she watched her battle buddies shoot down the range.

A Cadet waits for his next target to appear. Photo by Gia Cruz.

With more smiles than nerves at the range, the Cadets confidently walked to their fortified positions, ready to go through 120 rounds of ammo and exclusive trigger time.

The Army’s Got Skills