FORT KNOX, Ky – It was a rough morning for Cadets from 2nd Platoon, C Company, 7th Regiment, Advanced Camp, as they lost a third of their platoon in a defensive battle exercise July 23, 2018.

“Yesterday, we had taken a mortar position from some Op-For (opposing forces),” Cadet Eric Ward, University of Minnesota, explained  “Today our mission was to defend that position for a period of time, from 0900 in the morning to 2000 tonight.” 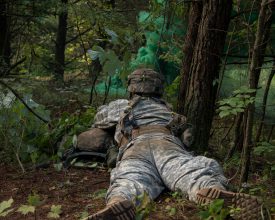 They had been expecting the enemy to come any time from 0900 onward. As they waited, people were starting to fall asleep. However, platoon leader and squad leaders maintained accountability, distributing snacks to the sleepy Cadets to keep them awake.

As part of the platoon leadership, Ward and his fellow Cadets devised a plan, using a terrain model they formed by drawing pictures in the dirt.

“We made this diamond shape and we had everybody spread out along it,” Ward continued. “It was going alright until they threw indirect fire at us.”

Unfortunately, the opposing force hit in areas they were not anticipating, so the Cadets made moves to adjust their plan. Amid gunfire, leadership directed teams to relocate, losing their formation and initial plan along the way.

“Our mission was to hold the position and that’s exactly what we didn’t do,” asserted Cadet Joseph Steier, Creighton University, who played the role of the medic. “It led to a lot of confusion down the line. Once we took indirect fire, it kinda went haywire and everyone went running in every direction.”

As part of their original plan, the Cadets called out to initiate the Gold Plan, an order to fall back and leave their position.

“We saw one enemy and we shot him,” Cadet Abigail Bibb, University of New Hampshire, described. “Then the indirect fire came and that’s when they called the gold plan. We weren’t sure if we were supposed to run off or not. Once I got up, the other enemy popped out and shot me down.” 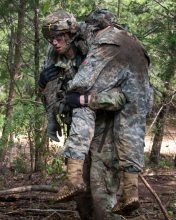 A Cadet from 7th Regiment, Advanced Camp carries a causality during a field training exercise July 23, 2018. Photo By: KirstyAnn Cole

In all the commotion and chaos that ensued, the platoon took casualties right and left because of small mistakes. Even the platoon sergeant went down after turning his back for one second without a guy to keep security.

“I actually, ended up having to carry a guy 200 meters down the hill, and then we had to carry him all the way back up,” Steier said. “I had to set up six or seven casualty collection points.”

When the mission wrapped up, the platoon was scattered throughout the area with a third of their platoon down. Although the mission did not go as planned and communication had lacked, the Cadets will take these mistakes and improve for the next exercise.

“Whether or not we do the mission a hundred percent right or wrong, the unity is growing,” Cadet Collin Kilpatrick, Mansfield University, elaborated.