FORT KNOX, Ky – It was a strenuous morning for 10th Regiment, Advanced Camp Cadets, as they made their way through the Confidence Course and down the Rappel Tower July 22, 2018. 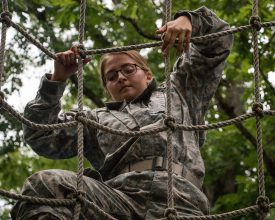 A 10th Regiment, Advanced Camp Cadet climbs her way down at net at the Confidence Course July 22, 2018. Photo By: KirstyAnn Cole

To start off the day, the Cadets began with demonstrations from Cadre who lead the training, showing them the rappeling process and how to complete each obstacle. Many Cadets arrived unsure of themselves and with fear in their eyes.

“I don’t like heights, so that was definitely something that I had to overcome,” Cadet Natosha Courtney from Mississippi State University said, still shaken after completing the Confidence Course.

The Cadets each had their individual way of processing the obstacles. Some fed off of their peer, while others either were self motivated or relied on the support of the Cadre.

“Everytime I had a scary thought in my head, I just took a deep breath and tried to tunnel vision what’s in front of me,” Cadet Calvin Han from University of California Berkeley described.

The obstacles scaled in height and difficulty. Some require great upper body strength, while others test agility. The hardest obstacle by far, has a name that embodies just that. 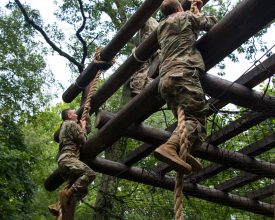 Cadets from 10th Regiment, Advanced Camp muscles up the rope of ‘The Tough One’ at the Confidence Course July 22, 2018. Photo By: KirstyAnn Cole

“It was called ‘The Tough One,’ which we unfortunately did first,” Cadet Robert Chase, Worcester Polytechnic Institute, explained. “Part of the first obstacle was climbing a rope, which I have never done, even in gym class. That was definitely the hardest part for me.”

It’s not just the obstacles themselves, but the endurance that Cadets find themselves struggling with. If it’s not climbing a rope, it’s swinging from one. Obstacle after obstacle tests these Cadets’ strength to keep going, to keep fighting through it.

“I burned myself out cause I’m not used to climbing rope,” Courtney elaborated. “I got up there and let go cause it was tiring.”

This event is where team building truly kicks into gear, as squads learn to encourage one another and work through tough times together. 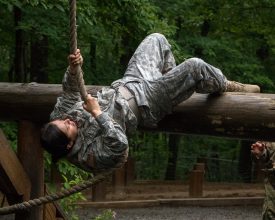 A Cadet from 10th Regiment, Advanced Camp swings to a log of an obstacles at the Confidence Course July 22, 2018. Photo By: KirstyAnn Cole

“For me it was a little tough cause I’m a bit shorter,” Cadet Bronwyn Stever, York College of Pennsylvania, said. “But, my squad was really supportive and encouraging, so we all got through it.”

When the series of obstacles was finally behind them, the Cadets found themselves with pride and fulfillment. However, the morning wasn’t over. Their next obstacle: the 64-foot Rappel Tower, which they conquered as well.

“It was my first time rappelling, so I wasn’t sure how that was going to go,” Stever explained, “It ended up being pretty fun once I learned how to control the rope properly.”