FORT KNOX, Ky. – In just 60 seconds, someone you love could be gone. But in that same time, you have the equipment and skills to save a life. 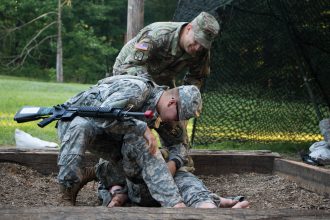 A Cadet from 8th Regiment, Basic Camp practices using a tourniquet on a Rescue Randy in under 15 seconds during his First Aid Training at Cadet Summer Training in Fort Knox, Ky. July 25 (Photos by: Amanda Surmeier)

For this example, their Randy suffered a femoral artery injury just above his knee. The Cadets were given 15 seconds to properly apply a Combat Application Tourniquet while following all of the necessary protocol. Attaching the tourniquet is the first part of their medical assessment, Care Under Fire. 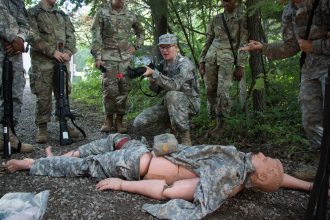 During the training exercise, Cadets notice their injured Randy during gunfire and must call out three questions: “Can you perform self aid?”, “Can you get a cover?”, “Can you return fire?” Following the questions, Cadets rush to the aid of their fallen soldier, immediately placing their knee and body weight on the injured femoral artery, located at the crease of the hip.

After the artery is suppressed, the tourniquet application begins. The Cadets locate the Individual First Aid Kit (IFAK) on Randy. The kit contains simple first aid supplies, including a tourniquet. Cadets must pull the tourniquet out of the kit, undo the strap and wrap it around the dummy’s leg, high and tight above the wound. Once the strap is secured, the Cadet turns the rod attached to the strap until the bleeding stops. Then, the rod must be secured inside a clip to lock it in place. Finally, the excess band wraps around the rod for extra security. Over the next four hours, Cadet after Cadet practiced their tourniquet skills while their squad members yelled, counting down the time and simulating a high-stress environment. 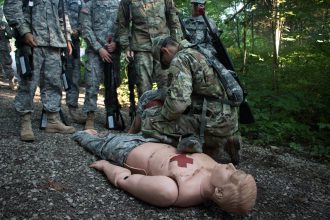 Although the process sounds easy, Cadets quickly learned that it is harder than it seems. “I think the most challenging part of tying the tourniquet is doing it under a time limit and remembering everything under pressure,” said Cadet Hannah Whittom from Murray State University.

This training marks the first glimpse of first aid for the Cadets. “At this level, these cadets really aren’t as exposed enough to tourniquets or any type of medical equipment as they should be, so the biggest challenge is really going over the different ways or preferences medics or any other people use for their tourniquets,” said Sergeant Joshua Vuong.

Even though most Cadets at this training will not go on to branch Medical Services, the skills learned will benefit them, no matter their job. “I didn’t know a lot about first aid, so this is a good lesson for me since I want to be an infantry officer. For me, it is especially important because my job will be specifically in combat and leading men in that sort of situation. If one of my guys goes down and the medic isn’t able to get to them right away, I would have to be able to go over and help them,” said Cadet Marcela Marta from the University of California at Santa Barbara.

“Whether you’re sitting behind a desk or you’re out in the field actually fighting, you never know when you might need to save somebody’s life.”

Got Gear, Not Fear.