FORT KNOX, Ky – For the past month, 5th Regiment, Advanced Camp Cadets have been in and out of the field, running through the mud, completing missions, and taking orders. With all of that behind them, the Cadets celebrated by spending time with their loved ones on Family Day, July 24, 2018. 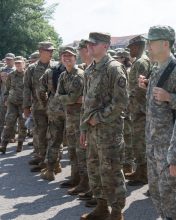 Cadets from 5th Regiment, Advanced Camp line up outside Waybur Theater on July 24, 2018, waiting to see thier friends and family. Photo By: KIrstyAnn Cole

“It feels fantastic,” exclaimed Cadet Geoffrey Wilson, Rochester institute of Technology. “It’s really nice to see them again after so long. [I] really missed them, in the field especially.”

Cadets lined up in formation outside Waybur Theater, where parents and grandparents are inside catching up on what their Cadet has been through.There, they are reunited, greeting each other with hugs and kisses.

“I could not wait to see him,” Wilson’s mother gushed, pride beaming from her smile. “I couldn’t wait cause I need he was going through some really tough stuff. It’s so good to see him.”

The families have about eight hours before their Cadet must return, giving them enough time to have a good meal and spend their time doing whatever they want together. 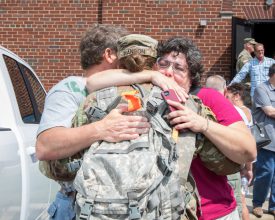 Cadet Kaleigh Ferguson, Boston University, was visited by her mother and grandmother, who she hasn’t seen in over a year. Their plans for the evening include food and just enjoying each other’s company.

Since many of the Cadets are in college or have been to Basic Camp, the time apart seems normal.

“This isn’t my first time being away from them, but it’s always exciting when you get to see them again,” Cadet Kathryn Clark, University of North Alabama, admitted.