The Cadets began gathering near the starting line before 3:00 AM. They stepped off 30 minutes later and began what some called their ‘journey home’. 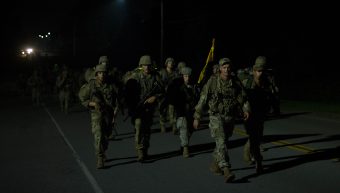 “It really felt like we were rucking to go home.” said Baylon Northap, Edinboro University. “It didn’t feel that long, because every mile felt like another step closer to home. The further you got the more excitement built up and the faster you were going.”

The bright red moon and the sea of bouncing green glow sticks that flooded the streets were the only sights that promised visibility. 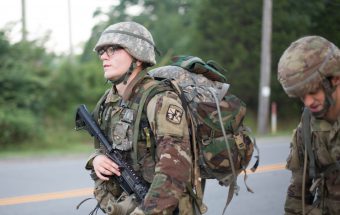 “I was passing mile markers and was like ‘oh another one'”, said Friedel. “You just have to distract yourself the whole time.”

The Cadets push though with mental resilience and physical strength. They must carry a minimum of 45 lbs. in their ruck sacks and complete the march in under 4 hours.

Knowing it was the only hurdle standing between them and graduation provided a lot of resilience for them said Cadet Zane Knight, Campbell University.

“Knowing this is the last big push of camp, just ready to get it over with and fire through it,” said Knight. “I’ve had this goal of getting here and becoming a second lieutenant for a couple of years now, so it was exciting to get 12-miles closer.” 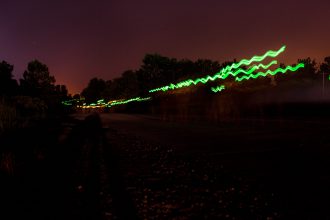 As a clear back sky replaced the bright moon and the fog rolled out of the wood line the Cadets’ sleepy faces perked up, and jokes bubbled up out of them as they kept pace ignoring the pain and bonded for possibly the last time with their battle buddies.

As Cadets fell in line with those of similar paces the stars melted into a cotton candy themed  sunrise of blue and pink. Sweat dripped from brows and stained many Cadets’ uniforms from chest to thigh.

As Cadets approached their last two-miles, support was at its pinnacle. A consistent flow of compliments, ‘Hooahs’ and shouts of determination competed with the sounds of rustling uniforms, squeaking rucks, and the stomping that chorused the Cadet’s march.

The Cadets who completed the ruck took to two main positions, resting or rallying. Those who weren’t attempting to dissolve into the thick layer of dew on the grass demanded their battle buddies, nearing the finish line, ‘sprint’ or ‘pick it up’.

Show Me What You Know