FORT KNOX, Ky. – Another obstacle out of the way! Cadets from 8thRegiment, Basic Camp tackled the Beaudoin Obstacle Course July 26. The course consists of eight obstacles designed to test the Cadets’ strength, endurance, confidence and leadership. 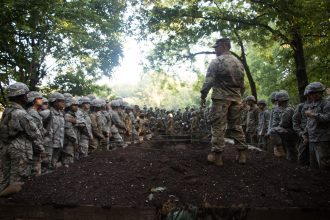 Cadets from 8th Regiment, Advanced Camp learn how to complete the obstacles on the Beaudoin Obstacle Course July 26 during Cadet Summer Training in Fort Knox, Ky. (Photos by: Amanda Surmeier)

Like any other obstacle the Cadets face throughout their training, comradery is what keeps the Cadets pushing forward. Throughout their 31 days at Fort Knox, each Cadet pairs with a Battle Buddy, a person responsible for boosting morale and holding the other accountable. For this training in particular, Battle Buddies are their most important team member.

“It’s a mutual relationship, and without my battle buddy, I absolutely wouldn’t have been able to do any of this,” said Cadet Zenab Chouai, Clemson University student. “She encourages me and I encourage her. It definitely goes both ways.”

Cadet Gissel Hernandez from University of Wisconsin Madison understands that these courses are designed to test Cadets mentally and physically, and said the importance of having a Battle Buddy is mainly to help build confidence. “Just being there for each other. Knowing that we’re there behind them, we’re there in front of them, next to them just screaming out their name reminding them they can do it,” said Hernandez. “Sometimes we get a little mental – we get a little ‘Oh man, I don’t know how I feel about this’ and we’re there as a constant reminder that it’s fine, we’ve done crazier stuff before. We can do it.”

Basic Camp, Cadet Summer Training (CST) for ROTC Cadets is a little different than Basic Combat Training for enlisted Soldiers. First-time Fort Knox CST Drill Instructor, Michael Campbell, likes to remind his Cadets just how important their training is as future Army leaders. “On a basic training level, we’re training privates to be a part of the Army and they’re not going to immediately fall into leadership roles. So we instill in them that individually, they need to grow into a leader right away.” 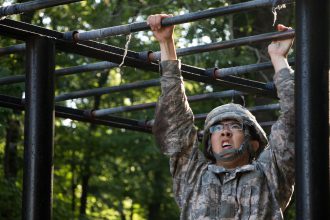 A Cadet from 8th Regiment, Advanced Camp reaches for the next bar on the obstacle course July 26 during Cadet Summer Training in Fort Knox, Ky. (Photos by: Amanda Surmeier)

“It’s testing our endurance, it’s testing us as warriors, as team members, as leaders. It’s been a really good experience. It definitely challenged all of us and made us closer,” remarked Chouai.

In life, challenges come often times unannounced. What the Cadets are learning here is that when hard times and tribulations knock on your door, they will have the strength and will-power to tackle them alone, but the wisdom and knowledge to know they don’t have to. Having that courage to seek help in troubling times and, in-turn, having the compassion to reach out and help those around them.

Do the Right Thing

Hit the Ground Running at Cadet Summer Training? Not Just Yet!