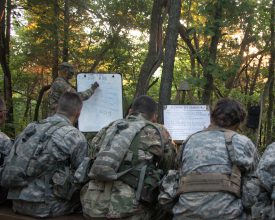 Cadets from 7th Regiment, Advanced Camp are taught how to preform a hasty assault during Squad Formation Order of Movement training July 25, 2018. Photo By: KirstyAnn Cole

The day started off with an early morning wake-up, an MRE breakfast, and a short trek to Training Area 7, where the Cadets were briefed and split up for individual squad training sessions.

The Cadets sat in small clearings in the forest, listening to play-by-play instructions of the operation they would be conducting.

They also reviewed basic mission procedures, such as first-aid.

“We briefly went through how to medevac someone, how to treat a patient, and how to deal with EPW, Enemy Prisoners of War,” Bouregy continued.

The mission was lead by Cadre, the instructors who train the Cadets. The Cadre stayed with them the entire time, giving them orders, helping them think through each step, and correcting mistakes.

“All these Cadre, they’ve been in our position before,” Cadet Griffin Clark, University of Iowa, stated. “It’s nice to have that kind of experience. Especially with this lane, I think we learned what exactly to do.” 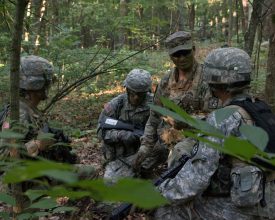 Cadets from 7th Regiment, Advanced Camp are guided to make their next move during Squad Formation Order of Movement training July 25, 2018. Photo By: KirstyAnn Cole

This exercise was all about teaching these Cadets, so that they can eventually do it on their own, leading each other and working together. This is the first of many field exercises. For those who come back for Advanced Camp, they will be continuously using the skills they learn here during their weeks of field training exercises.

“I learned how to properly use ‘aid and litter’ (an Army term for first aid) because I didn’t know the names of what I was supposed to use and how to do it.” Cadet Meaghan Ambelang, University of Wisconsin-Stevens Point, said. “You stay with your patient instead of going to your squad leader. I guess my patient would have died cause I would have done that wrong.”

The Cadets successfully performed their first mission, finishing with only one simualted injury and one casualty. The squad moved as they were instructed, communicated well, and took on everything the Cadre threw at them.