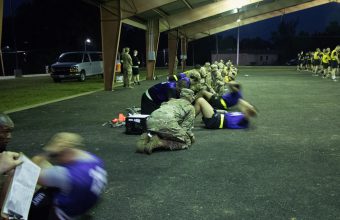 FORT KNOX, KY. — Pushing yourself mentally and physically is an enormous part of being in the U.S. Army. Cadets from 8th Regiment, Basic Camp woke up early this morning July 26th, 2018, to take part in the Army Physical Fitness Test.

The APFT is a way to determine whether or not Cadets are in peak physical shape during CST.

Cadets are required to do a specific number of push-ups, sit-ups and a two-mile run in a certain amount of time according to their gender and age.

According to Cadet Kobe Kupp, Eastern Washington University, keeping up with personal physical fitness is important in the Army. 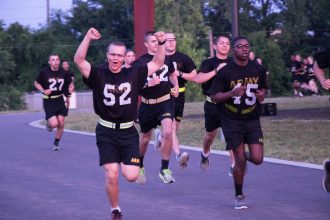 “You’re going to have to do different kinds of activities, so doing push-ups and sit-ups is basic core strengths that you’re going to need for any every day job,” he continues, “Maintaining a good two-mile time and having your cardio-vascular endurance up is a solid, all-around thing to have done.”

Cadet Lauren Hansen, Bowling Green State University, explains that in order to be a leader in the Army, Cadets must be physically fit.

“For Cadets, it’s really important to make sure you keep up with your physical fitness because in the future we’re going to be leaders, people will look up to us, and we’re going to have to do the same things our soldiers do,” she explains, “they’re not going to respect us if we can’t do physically demanding things ourselves.” 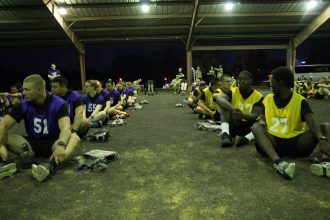 Cadets from 8th Regiment, Basic Camp, push their skills to the limit during the push-ups portion of APFT July 26, 2018 at Fort Knox, Ky. Photo by Haley Brown

APFT not only proves Cadets physical strengths, but also the strengths within their platoons.

Building morale within platoons and staying positive is a key factor in doing well during APFT.

“We are all very motivated here, we keep each other positive, we make sure everyone is going strong as best as we can.”

Cadets boost spirits by cheering their fellow Cadets on and encouraging them. 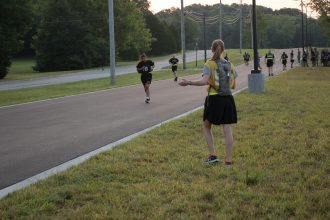 “I was just cheering and clapping, they’re almost there, just letting them know that they’ve got a little bit more and they can definitely do it,” she explains, “the Army is a team sport, if you don’t have your team, you don’t really have much.”