FORT KNOX, Ky.—6th Regiment, Advanced Camp participated in Branch Orientation, where they learn about the Reserves, the National Guard, and all 17 branches the Army has to offer to new 2nd Lts.

“Our job is to bring the branch to the Cadets,” said Capt. Austen Boroff, Office of the Commandant Field Artillery Proponent Office. “We try to give them a greater understanding of what we do.” 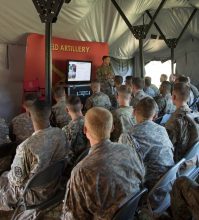 Branch Orientation is a lot like speed dating. Cadets go to tents set up by all 17 branches, as well as the Army Reserves, and the National Guard. At each tent, Cadets normally watch a short hype-up video by the branch and then they get a run down of what the branch does, what a new 2nd Lt. can expect from that branch, and why that branch is the best.

“Field Artillery was not my number one choice, but I love what I do. Had I known as a Cadet what FA was, it would’ve been my number one. And I think a lot of Cadets want to know what to expect and how each branch can help them in a unique way,” stated Capt. Boroff.

Cadet Natalie Taylor, Texas A&M University, spoke about why she thinks Branch Orientation is a positive training for Cadets to pay attention to, “We have just a few months left before we have to finalize our branch list. We just came out of the field where we focused on infantry tactics so this orientation is a good time for us to see what all else the Army does.”

“Luck of the Draw”: MREs and Nutrition