This phase of training is heavily guided by Cadre and serves as instruction for Cadets.

Cadet Karli Ring, a student at George Washington University, called what the Cadets were being taught the “doctrine, know-how” way to carry out the mission set before them.

As a small group of Cadets set off for a leader’s reconnaissance patrol, Ring explained, the Cadre had the rest of the Cadets follow and observe rather than post security, as would normally be required, so they could see how the patrol should be carried out.

Cadre explained that they go through the training lanes slowly with the Cadets to show them what they will be looking for so there won’t be any confusion regarding standards and expectations for grading. 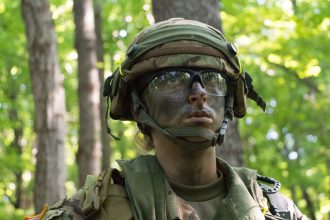 Cadet Micheal Jones, a student at the Georgia Institute of Technology, described the walk through of the attack exercise as a clear-cut demonstration of what the leadership and their subordinates should be doing in that situation.

“They’re not leaving out any steps,” stated Jones. “I feel like if we were to do this exactly how they’re teaching us to do it then we would 100% be successful.”

He added that he’s looking forward to applying the information that he’s learned through training, both in and out of camp, in the upcoming phases of Field Training Exercises.