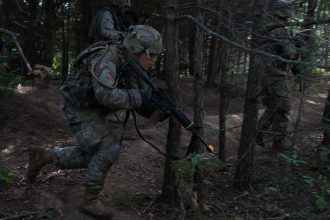 Cadets from 8th Regiment, Advanced Camp practice an attack of the Op-For during their Field Training Exercise at Cadet Summer Training in Fort Knox, Ky. 27 July. (Photos by: Amanda Surmeier)

FORT KNOX, Ky. – What started out as a calm morning in the woods turned into a high-speed attack for 8th Regiment, Advanced Camp Cadets.

This morning (27 July), the Cadets were given a mission to later conduct an attack on a Linear Danger Area. With only a grid location and a time, the Cadets moved meters from the op-for and set up an objective rally point. Once they got the objective rally point set up, they sent out a leaders recon to scout out a position to get eyes on how many enemy personnel were there and what weapons they had. After obtaining eyes-on the objective the Cadets went back to brief the rest of the platoon.  Once everyone was briefed, the Cadets moved out on-line to prepare for the attack. 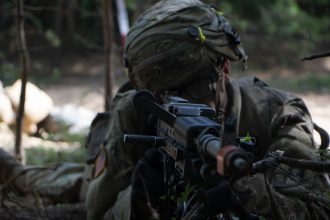 A Cadet from 8th Regiment, Advanced Camp takes aim during an attack of the Op-For during their Field Training Exercise at Cadet Summer Training in Fort Knox, Ky. 27 July. (Photos by: Amanda Surmeier)

Right now, everything for the Cadets is fairly basic in their “walk” phase of the “walk-crawl-run” Field Training Exercise. Once they hit the “run phase” Cadre begin increasing timelines, ramping up the stress and adding other elements to the mix. To make things more interesting, Cadre sometimes “kills” leadership in the midst of the exercises to see how well the leadership has disseminated the information before they begin. The terrain is more rugged, the Op-For is more aggressive and the overall training environment is far more difficult. 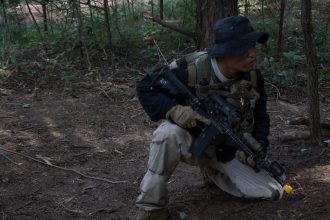 An Op-For Soldier prepares for an attack of the 8th Regiment, Advanced Camp Cadets during their Field Training Exercise at Cadet Summer Training in Fort Knox, Ky. 27 July. (Photos by: Amanda Surmeier)

Op-For makes up the enemy forces the Cadets are up against. Op-for member for Cadet Summer Training, Private First Class Jovany Santoyo out of Fort Lewis, Wa. said of his experience on the enemy forces, “This is to help them lead us. They’re going to be our leaders. When they conduct these missions, they have to be on their game.” The real-life experience the Op-For brings to Cadets teaches them the discipline they need to become future leaders.

“You’ve got to be out there in front of them. You’ve got to be motivating them because it gets hot, everyone is miserable and you can see the morale drop from the long days. You’ve got to be able to motivate your troops and keep the drive high. That is the key to success out here,” said Captain Richard Metzgar, Platoon Training Officer from the University of Arkansas. 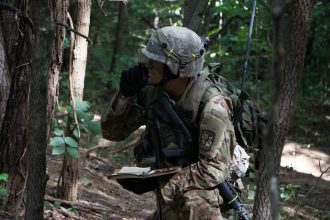 Cadet Nicholas Bopp, the RTO from Colorado State University in 8th Regiment, Advanced Camp makes a call to the Platoon Leader during an attack of the Op-For during their Field Training Exercise at Cadet Summer Training in Fort Knox, Ky. 27 July. (Photos by: Amanda Surmeier)

Cadet Nicholas Bopp from Colorado State University kept control of the attack as the Radio Transmitting Officer and learned just how important communication is to the success of a mission. “As the ‘radio guy,’ it’s really difficult to communicate to everyone moving all of the elements and pieces of a mission. It’s hot out here, it’s harsh weather and it starts to take a toll on yourself and other Cadets around you, so it’s just keeping that motivation up with your squad and your platoon to motivate yourself and your peers.”

“Keep a positive attitude and be motivated. Just remember that all of this will be over soon and then we can commission,” said Cadet Ivy Yamaguchi from the University of Portland. That is what Cadet Summer Training (CST) is all about: training to lead.

Within the next year, these Cadets will go on to commission as Second Lieutenants in the United States Army. The training and preparation they experience at CST will provide them with the skills to be the future leaders of the Army. Cadets train to lead at CST, but lead to train as officers.

Trusting in Your Battle Buddy