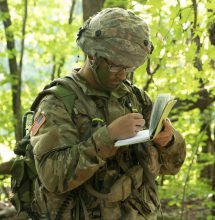 Fort Knox, KY– A chilly morning for the Cadets of 4th Platoon, Bravo Company, 9th Regiment, Advanced Camp as they learned the basics to conducting a raid.

As Cadets took notes and listened attentively, a lane instructor walked through ‘must-do’ events for key leaders such as knowing where heavy weapons, such as the M240 machine gun and M249 squad automatic weapon are at all times, locating target reference points, terrain analysis and knowing sectors of fires for each person. 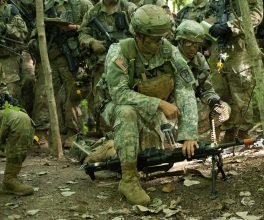 Cadets place an M240 strategically behind a covered area. Photo by Gia Cruz.

According to the Cadet Hand Book, a resourceful guide issued to each Cadet at the start of their Regiment, raids are surprise attacks against a position or installation for a specific purpose other than seizing and holding the terrain. It is conducted to destroy a position or installation, to destroy or capture enemy soldiers or equipment, or to free prisoners. A raid patrol retains terrain just long enough to accomplish the intent of the raid. A raid always ends with a planned withdrawal off the objective.

Artiom Milor, Florida State University, comments during the mission’s rehearsal about his position as ammo bearer. “I just feed the ammo to the 240 gunner,” he says, “it’s not as much fun as shooting of course.” 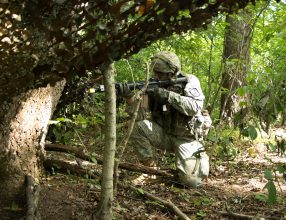 Cadets rehearse their movement techniques as they are walked through the mission.

As morale is positively present within the Platoon, Alexis Montgomery, University of Houston, explained the process of what was happening. “We’ve been doing some recon in the area, seeing where we are going to place our support by fire, our assault and we are just going to have a great time.”

Montgomery also added that although they have been in the field for a little over a week, spirits are high and the Platoon’s confidence level definitely helps in aiding a smooth path for the upcoming missions during Advanced Camp.