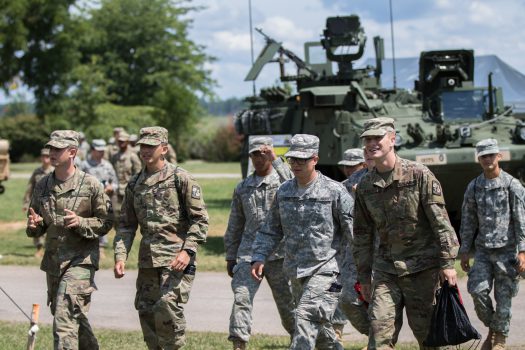 After completing the Advanced Camp in the Army ROTC program , graduated Cadets will be commissioned as Second Lieutenants in the U.S. Army and will embark on specialized training in their first Army branch.

At Branch Orientation, Cadets were free to attend any tent that interested them, talk to people and ask questions.  It allowed Cadets to learn about all different branches and makes every opportunity available to everybody.

Tents, and military vehicles lined the field of Keyes Park; the experienced Soldiers or Cadre from each branch of the Army are talking with Cadets about specific information of the branch assignments, and trying to help them to make the right decision for their military career path. 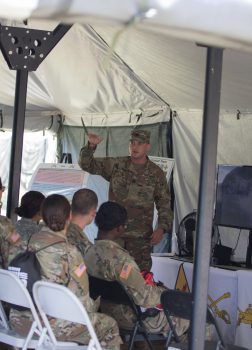 Cadet Christopher Manning from the University of Central Florida said, “We are looking around at different branches and see what each one can offer me. This is related to what we are going to do after commissioning.”

The Branch Orientation gives Cadets an opportunity to know what the Army has to offer and provides them with a familiarization of what jobs are out there in the Army.

“Since I’m in the pharmacy right now, I might want to work with Health Science afterward which seems the best fit for me,” Manning said.

Like Manning, some of the Cadets have already thought about their choices and made their plans early on. The Branch Orientation is designed for them to avoid making any misguided or uninformed decisions.

It is difficult to give every Cadet their first branch choice. So it is essential to learn about multiple branches: it is all about information and how they can set themselves up for success.

Calm Before The Storm