FORT KNOX, Ky. – As the sun began to rise over Fort Knox early Saturday morning, Cadets from 10thRegiment, Advanced Camp were hard at work tracking various coordinates in the woods during their Day Land Navigation exam.

Put simply, the concept of the Land Navigation exam, often referred to as “land nav,” closely resembles that of a treasure hunt: Cadets are provided with a map of the terrain in the form of a grid as well as a compass, a protractor, and a set a coordinates to find their exact destination.

A Cadet from 10th Regiment, Advanced Camp plots his coordinates before heading out into the field to locate his points.

Here at Cadet Summer Training, however, this treasure hunt doesn’t involve pirates, talking parrots, or gold coins. Instead, the giant red X on the map serves as the location of one of four potential points these Cadets must find to pass Advanced Camp.

What is Land Nav?

During their land nav exam, Cadets are allotted four hours to find a minimum of three out of the four coordinates provided to them. Using just their maps, their compasses, and the navigations skills they’ve accumulated throughout their time in ROTC, Cadets must navigate the difficult terrain on their own to pass the exam.

“Land Nav is using your compass, map and the terrain features around you to get from point A to point B,” summarized Cadet Samuel Dugan, University of Louisville. 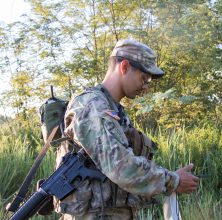 Armed with a map and a compass, a Cadet from 10th Regiment, Advanced Camp, participates in his Land Navigation Exam.

After being given their map and coordinates, Cadets are then given the task to plot each point and determine the best route of action.

“I like to plot all of my points first so that I can find the shortest route possible from start to finish,” advised Dugan.

Dugan, who recommends terrain association as the best plan for action, finished second out of the 350 Cadets who call Alpha and Bravo Company home with a time of a little over one hour.

Before they are released into the wild to find their points, Cadets undergo precise training to ensure they’re ready for whatever land nav has in store.

“Prior to training with their Cadre,” said 2ndLt. Eddie Quinton, “Cadets also do a written test to make sure they know what to look for as far as angles and how to read a map.”

When asked what Cadets tended to struggle with most during the exam, Quinton admitted that the difficult terrain combined with the intense Kentucky summer heat takes a toll on Cadets. All in all, however, Quinton seemed pretty optimistic as to how Cadets were handling land nav. 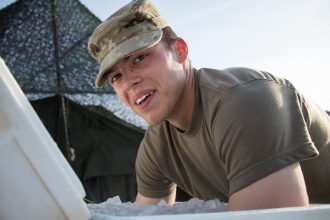 If Cadets are unable to locate the minimum amount of points within the allotted four hours, Cadets are then eligible to retest to secure their spot at Advanced Camp graduation.

Although this treasure hunt isn’t nearly as glamorous as the ones we see in movies, it’s here that our nation’s future leaders are developing the skills necessary to navigate all kinds of terrain, no matter how hot or how hilly.