The Cadets’ assignment was to execute a raid, infiltrating a group of oppositional forces holding a position deep within the forests of Training Area 12. 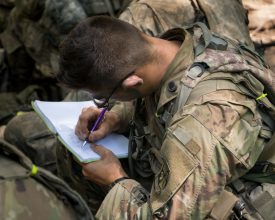 A 9th Regiment, Advanced Camp Cadet takes notes, as he is briefed by the platoon leader July 29, 2018. Photo By: KirstyAnn Cole

“It was initially a recon,” Cadet Joshua Westerhaus, Coastal Carolina University, stated. “Then we got a frago (a redirected order), once we got here, that we were going to do a raid…So, we went back to the ORP (Objective Rally Point), the platoon leader did the [operation] order [and] briefed the platoon.”

During the briefing, Cadets settled down in front of the platoon leader and platoon sergeant, taking detailed notes of the game plan laid out to them and illustrated by an area display. Then, they conducted a run-through of the attack.

“Before stepping off, we did a lot of rehearsals and things seemed to go as planned,” Cadet Daii Gardner, Alcorn State University, said. “Once we got on line, [we were] able to execute because we had been through so many rehearsals and we had such great communication.”

A squad was positioned atop a small hill with M240s and other large weapons as the rest of the platoon infiltrated with a line of fire – clearing the area and taking out the opposition. 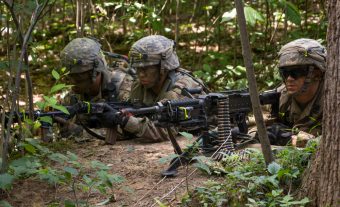 Cadets from 9th Regiment, Advanced Camp set up a a line of fire before their platoon raids an oppositional position July 29, 2018. Photo By: KirstyAnn Cole

During the raid, Westerhaus, who was placed as a squad leader in charge of Assault One, described how he had to continuously yell at his Cadets to stay on line and keep going.

“A lot of times they’re stopping and they would lose situational awareness keeping other people in order,” he explained. “That’s my job, not their job.”

Leadership is what these exercises are teaching the Cadets, how to lead and how to follow someone’s lead in a combat situation. As they practice, Cadets are understanding what it means and what it takes to be an Army officer in the field.

“When you’re in charge, gain charge,” Cadet Westerhaus advised. “Boy or girl, you gotta pull up your man voice. You have to yell. You have to make yourself known.”

Not only do these exercises build them as leaders, it reinforces the tactics they are taught back at their universities. 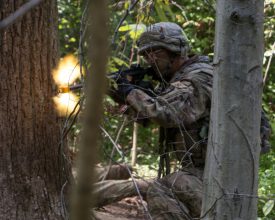 A Cadet from 9th Regiment, Advanced Camp fires at the oppositional force during a situational training exercise July 29, 2018. Photo By: KirstyAnn Cole

“All through your years in ROTC, you study and prepare for [it],” Cadet Gardner elaborated. “But, there’s nothing like going out in the field and actually doing it. Once you get out there, it’s a lot different because now it’s physical, more than a classroom setting.”

With zero platoon casualties, the Cadets’ mission was a success. The Cadets now have the confidence they need to go into field training exercises, where it’s all up to them to lead their platoon and complete the mission.

“I believe we all have a firm understanding of how we operate together as a team,” Cadet Joshua Cummings, Clemson University, affirmed. “With upcoming missions, I believe we’ll refine that. By the time of our third FTX we should be pretty high speed.”