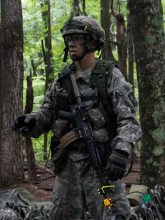 Fort Knox, KY–  Within a platoon, one can find different personalities, a multitude of talents and even parents. Cadets of 3rd Platoon, Delta Company, 9th Regiment, Advanced Camp were able to immediately identify a Cadet that is definitely a triple threat among them.

Cadet Anthony Jett, Missouri University of Science and Technology, hidden towards the back of platoon, easily stood out because of all the praises his battle buddies were saying about his character. “I wanted to go the Officer route just to feel like I had more of an influence,” Jett said.

Jett, a former Sergeant in both the Regular Army and National Guard, has an accumulated 15 years of service along with a Combat Action Badge and Aviation Wings. “I have many achievements within the Army,” Jett started to list, “I have 7 Army Commendation Medals, 1 Army Achievement Medal, Overseas Service Ribbon, deployment ribbons, Good Conduct Medals, just various stuff.” 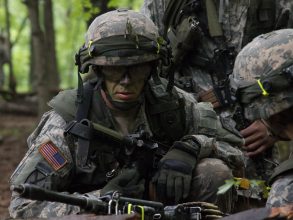 The 36-year-old Cadet mentioned having three deployments to Iraq and 1 in Afghanistan as both a Medic and a Chinook mechanic. With a wife of 13 years and 3 children from the ages of 5 to 12, Jett mentioned how adjusting to the Army plays a part in his life.

“It gets difficult at times,” Jett mentioned, “my two oldest are a little more used to it since they have been through deployments.” Jett jokingly added that his experience as a Medic overseas has helped with teaching him things he never thought he would use in the future like the makings of a defensive position. 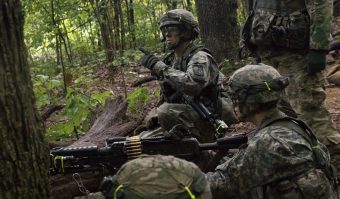 Cadet Anthony Jett looks for fields of fire during an FTX on July 31, 2018. Photo by Gia Cruz.

Another fun fact about Jett is that he is 1 of 2 Cadets left in the running for RECONDO in 9th Regiment. “it’s a prestige bragging rights title, and to be honest, I wasn’t even trying to go for Recondo,” he humorously added. “You have to get a first time go on all of the events, all I have left is the 12 mile ruck”.

When asked about rucking in under three hours to attain the RECONDO badge, Jett laughed. “It’s Doable, all it takes is a little motivation.”

The Road to Expert Shooter