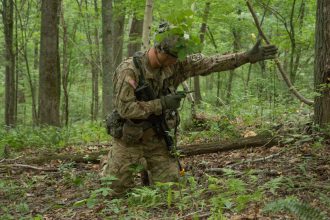 Cadet Joshua Brenner, San Diego State University, motions for others to follow his lead during a raid at Field Training Exercises on July 30, 2018, at Fort Knox, Ky. (Photo by Emilia Kuentz)

During the Grizzly phase, also known as the run phase, the Cadets conduct the missions themselves as opposed to being guided through them by Cadre like in the Wolverine (crawl) and Panther (walk) phases.

Cadet Marc Venditti, University of South Florida, the platoon leader for yesterday’s mission, explained that he utilizes the chain of command to communicate with his platoon.

Cadet Joshua Young (platoon sergeant), University of Tennessee at Martin, takes a knee with a fellow Cadet during a raid at Field Training Exercises on July 30, 2018, at Fort Knox, Ky. (Photo by Emilia Kuentz)

He gives information to his squad leaders, who pass it on to their team leaders, who then disseminate it to the lowest level, individual Soldiers.

Fourth squad leader Cadet Joshua Brenner, San Diego State University, stated that during a mission communication must “ensure that we are tactically moving through the area of operation as quietly and quickly as possible.”

He mentioned that different hand and arm signals are used to communicate instructions, such as to fall into a certain type of formation or get down into the prone position.

Cadet Marc Venditti (platoon leader), University of South Florida, calls out a 9-line during a raid at Field Training Exercises on July 30, 2018, at Fort Knox, Ky. (Photo by Emilia Kuentz)

During the planning process, explained Brenner, “I give them clear and concise guidance on what I need done and what the squad needs to accomplish to assist and aid the platoon leader and the overall platoon’s mission.”

“You have to keep your head on a swivel,” added Young, noting the importance of continuously being open to receive communication from others.

Young mentioned that in this context one needs a knowledge of standard operating procedure as a basis for communication, expressing that each individual Soldier needs to know their purpose two levels up. 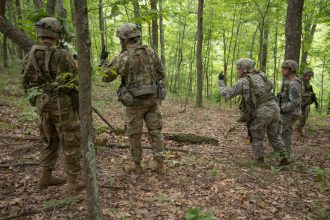 During the After Action Review, Venditti similarly reminded his platoon that they must keep in mind how their responsibilities may evolve during a mission.

“If you’re the alpha team leader and you can’t find [your squad leader] and they’re not finding you for your LACE reports, chances are they’re a casualty,” stated Venditti. “That means you’re the squad leader now.

Young expressed the importance of being prepared to react and adapt to changing circumstances, noting that his platoon hadn’t practiced what to do in the case of losing the majority of a squad.

“Going from a regular Joe to a squad leader… It hasn’t happened yet – it happened today,” added Young, correcting himself.

Motivation is key in weapons qualification