FORT KNOX, Ky. – Cadets are allowed to receive care packages and letters during their one month of training at Cadet Summer Training. These packages can help with morale of the individual and sometimes the whole unit.

Cadets of 8th Regiment, Advanced Camp have been lucky enough to receive these morale boosting gifts throughout their time at Camp giving them something to lean on during their wet and muddy day in the field. 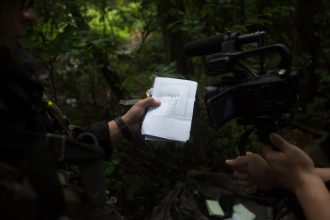 Cadet Alejandro Viloafuerte, University of Illinois at Chicago,shows the camera a drawing this girlfriend made for him while he was in the field at Fort Knox, Kentcuky July 31, 2019. Photo by Dustin Massengill.

Cadet Maddie Stone, University of Oklahoma, says notes, letters and packages are highly appreciated due to the limited contact they have with the outside world.

“Getting letters is a good way to stay in contact with our family,” she said. “My grandpa actually sends me news paper clippings from my home town, and everyone gets to read them. Some of them are like sports pages and comic strips and stuff.”

“It’s really great,” he said. “We are so used to living in this bubble, at this camp, the packages and letters kinda give us a look outside of the bubble.”

Food is a precious gift according to Costello. Eating the Meals, Ready-to-eat, or MRE’s  are filling, but the Cadets enjoy the snacks and gifts that they are able to eat outside of those.

“The package comes and its full of Oreos, goldfish and fruit snacks,” he said. “So, it is something with a little more flavor, and it isn’t prepackaged and made to last forever, and everyone smiles and has a good time because of it.”

Costello didn’t originally know he could have mail order sent in while he was at camp, and was surprised when he received his first package.

Cadet Alejandro Viloafuerte, University of Illinois at Chicago, flips through numerous letters while standing in the field at Fort Knox, Kentcuky July 31, 2019. Photo by Dustin Massengill.

“You are supposed to open it up and make sure you don’t have anything you aren’t supposed to,” he said. “What we saw was snacks and we got permission to hand them out and everyone was super happy about it, people loved getting even a small snack out of this big box.”

“Often it is a good cap off to a hard day,” he continued. “Sometimes the mission might not have gone so well, people are tired, people are wet, people are cold and there is a little extra package of Oreos or goldfish to pick up morale. It is fun to share that with the group too.”

Cadet Alejandro Viloafuerte, University of Illinois at Chicago, has written and received a lot of letters from his girlfriend Cadet Sylvanna Parra, 4th Regiment, Advanced Camp.

“It’s a real good pick-me-up, especially like today when it is raining, hopefully I get a letter in the mail.”

March Until You See the Sun, Then Keep Marching