FORT KNOX, Ky – As the beginning of their Field Training Exercises, Cadets from 8th Regiment, Basic Camp spent the day of August 1, 2018 split up by squad, running through various tactical operations. 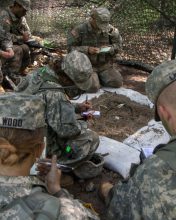 Cadets from 8th Regiment, Basic Camp coordinate a plan during a Field Training Exercise on August 1, 2018. Photo By: KirstyAnn Cole

The Cadets started the planning phase of the mission after receiving an initial order. This is when the Cadet in charge, the squad leader, gives a detailed brief of who will be going where and how the operation will unfold, making sure everyone is on the same page.

“We were given the op ord. [operation order] that we were going to do a deliberate attack,” Cadet Aaliyah Roura, Florida State University, stated. “However, it ended up being a react to contact.”

The squad made moves towards the opposition, maintaining noise discipline and their formation.

“I was the first person to take contact,” Roura said. “At first, I heard the contact before I saw it, so I thought it was from another lane. But, when I was able to finally see him, I [called] out the three Ds, distance, description, and direction. So, I had Alpha Team get on line. I had the squad leader come over, asses the situation, and then Bravo Team flanked through.” 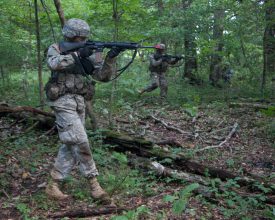 8th Regiment, Basic Camp Cadets advanced toward the objective for a deliberate assault during a Field Training Exercise on August 1, 2018. Photo By: KirstyAnn Cole

During the attack these Cadets use what they have been taught and focus on proper protocol to ensure the best outcome for their team.

“When I saw the enemy, my first instinct was to get down and make 360 security since we were the back team,” Cadet Eduardo Paez, University of California, Santa Barbara, explained. “That’s the protocol…I was just focused on everything they taught us.”

However, these Cadets are still in the learning process, making mistakes and correcting them as they go. This mission resulted in a handful of simulated casualties for the squad. After losing an unexpected number of squad members, the Cadets were forced to make adjustments.

“We didn’t have a contingency plan for if we lost that many people,” Paez reflected. “It’s just another thing we [were] not prepared for. Now, when we conduct new missions, that’s something I’m always gonna bring up, like ‘What if we lose a lot of people? What’s our point of action of how we’re going to respond to that?’”

Each day, each mission builds cohesion and confidence between the Cadets. 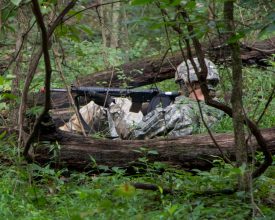 A Cadet from 8th Regiment, Basic Camp aims towards the objective during a Field Training Exercise on August 1, 2018. Photo By: KirstyAnn Cole

“Overall, as a squad, we are definitely communicating better,” Roura elaborated. “We’re definitely working together better. As … everyone’s knowledge of each attack and movement is getting better, we’re improving. We’re saying ‘well, we did this wrong before. Now, we can adjust to this.’”

Practicing these missions, running through procedures, brings each Cadet to a baseline level of understanding that will serve them well in Advanced Camp, where they go through days of Field Training Exercises.

You’re going to get dirty. Period.