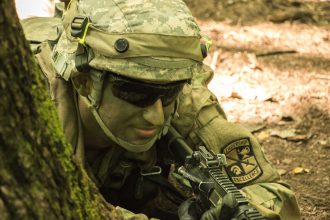 “Today is the last day of our STX, Situational Training Exercise. Basically, we are in the crawl phase of what we’re going to do. These are all Cadre run. We’re going through the motions and letting them show us how they want the lane set up and how to properly execute the things that we’re trying to do,” explained Cadet Logan Karsteter, Purdue University, (hometown) Milan, Indiana.

Each iteration, or repetition, of the exercise was modified slightly to keep Cadets both focused on the objective and to test their leadership abilities. Though performing the crawl phase, many Cadets found the pace helpful for learning purposes.

“It’s most definitely helpful. You learn a whole lot more by going through with the Cadre and having to stop and explain what we’re doing and why we’re doing it,” stated Cadet Raven Grubbs, Alabama A&M, (hometown) Abbeyville, Ala. 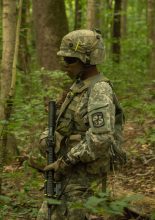 Though the Cadre are assisting the Cadets, many of their decisions as Platoon Leaders, Squad Leaders, and Platoon Sergeants are their own. Each Cadet possesses different backgrounds which influences their choices and adds a challenging factor during exercises.

“Chemistry. This is the first time we’re meeting 40 other people and having to operate with them and work together. So, just getting together with different backgrounds and personalities down,” said Karsteter. “Some people have short fuses, some people are too laid back. Just getting that chemistry and making sure everyone is on the same page. Everyone is from different learning backgrounds.”

Cadet Ashley Tucker, University of Alabama, (hometown) Birmingham, Ala., offered her take on what it takes to be a good leader. “You have to listen to everyone else and take into consideration what’s going to make the whole concept and the whole mission better. You have to work, train, and think of everyone else as well.”

Certain, high expectations are held by the Cadre as they train Cadets to be future Army Officers. 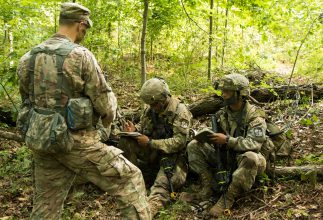 “I expect a high level of initiative and the ability to think critically. All of the leadership roles that are being played out here during CST, specifically in Advanced Camp Tactics, are written down in doctrine. All of the duties are clearly delineated for all of these Cadets in a number of different forms,” said Capt. Joshua Causie, a PMS at Xavier University. “So, I expect them to at least have a working knowledge of what these duties are, what the responsibilities are that correspond to those duties, and then think critically and take initiative in the execution of those duties for support.”

Cadets, like Cadet Grubbs, see the task ahead and are prepared for the challenge.