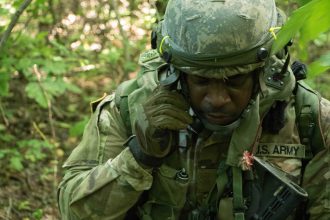 Cadets had a left, center and right squad setting up a perimeter in order to surround the enemy….or they were supposed to. Two Squad Leader’s were unable to contact the remaining Squad and had to physically track them down in the wood to establish their position.

Once the attack started, not one but TWO Squads got taken out by the numerous enemy machine guns. While the Platoon engaged with the enemy, the Platoon Leader was nowhere to be found, causing the Platoon Sgt. to assume command. 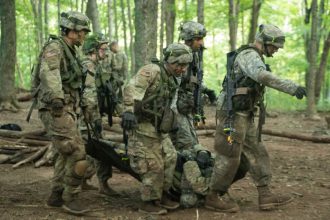 Prior Enlisted Cadet Ryaan Villagomez from Cameron University talked about the difficulties of the mission and bringing individuals of different backgrounds together.

“We’re all from different areas and backgrounds and we’re all here to develop as leaders,” said Villagomez. ” We’re all not going to be Infantrymen so you have to understand the

difficulties of all these different personalities and backgrounds coming together as a team in 14 days. We identify the obstacles and challenges we had today and try and do better tomorrow.”

Though the mission was rough to say the least, Cadet’s weren’t afraid to step into leadership positions as individuals were downed by the machine gun.

“The succession of command went well,” said Villagomez. “They didn’t hide, they didn’t freeze up; they pushed forward.” 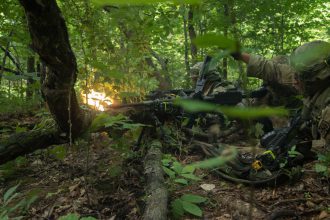 Cadet Anthony Ventrano from the University of North Carolina- Charlotte was no stranger to FTX exercises, but said for many it was their first experience out in the woods and the struggle for unity happens a lot at the early stages.

“You take 36-37 Cadets from different schools, elements, regions, backgrounds, cultures, and you put them together in one little ‘melting-pot’ and tell them to work together,” stated Ventrano. “You have to overcome that obstacle and get everyone on the same page so we can work together and tackle the objective.”

The Platoon has a chance to recover and learn from their mistakes as they continue with Panther and move onto the next phase of FTX — Grizzly — where Cadets will be on their own. Let’s hope they don’t rush any more machine guns.