When the Cadets woke up that morning, described Cadet Olan Field, they knew that they were going to be conducting an ambush but weren’t exactly sure where.

“We had to … go and find out information and then utilize that information that we received into our next mission,” stated Field.

Platoon Sergeant Cadet Perry Patton, a student at Harding University, explained that a leader’s reconnaissance element met up with a defector who provided them with enemy information to use to shape their ambush planning. 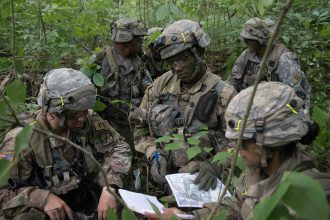 During the ambush, the platoon directed heavy fire at OPFOR moving along a road. Patton expressed that the platoon displayed strong violence of action on the objective, moving across and clearing the road with purpose.

“At first we had a lot fire power coming out at them,” noted Patton. “I think we were able to startle the enemy.”

Field, a student at the University of Oklahoma, was the A team leader for first squad, which acted as a reserve squad – ready to respond if needed.

“I had two people below me who I was directing,” stated Field. “Essentially telling them where to go, where to place to ensure that their forces of fire were utilized effectively without harming their other forces.” 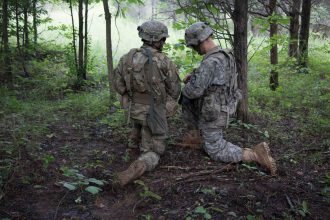 As soon as the assault element signaled that they’d reached their limit of advance, they were met with fire from the OPFOR Quick Reaction Forces (QRF) from three different directions, described Cadre.

Fire from the QRF cut the assault element cut off from its support by fire element. At that time the reserve squad was situated at the far back of the platoon.

“We’re typically situated a terrain feature away from where the objective is,” noted Field, which puts them out of sight and harm’s way so that they’re able to assist when called.

Field reported that the reserve element was able to cross the objective and clear the area on the other side. The reserve squad got on line and forcefully swept through the woods, moving parallel to the road. 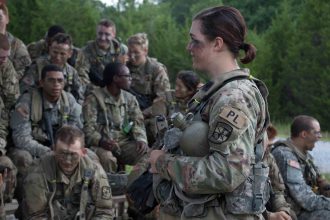 Platoon Leader Cadet Harleigh Payne, University of Central Florida, stands before her platoon during an After Action Review at Field Training Exercises on August 1, 2018, at Fort Knox, Ky. (Photo by Emilia Kuentz)

Prior to this, Patton mentioned, the squads had trouble communicating their positions.

“We had different elements moving in different directions to try and suppress that other enemy,” he explained.

Patton continued that his biggest takeaway from any of the missions is that communication can always be improved.

“As leaders we need to empower our Soldiers to communicate things and be comfortable communicating things as soon as they see them,” he added.

“We need to be able to assess the situation, make decisions, and communicate those decisions to other people,” stated Patton, “so everyone has a clear picture of what’s going on.”

Basic Camp – a way for Cadets to follow their dreams

Getting Down to Brass Tacks

Small in stature, mighty in force