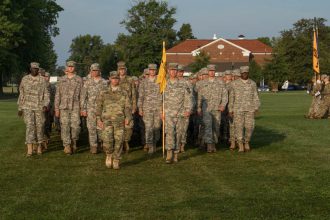 As family and friends of Cadets filled the stands that surround Brooks Field, the Regiment begins to form up just a few hundred feet away and the Cadets’ excitement to go home builds.

“I’m really excited to finish up Basic Camp, it’s been a blast,” said Cadet Lewis Pack, The Citadel. “I was an Air Force ROTC Cadet prior to this and this was much more fun and I really like the Army life.”

Cadets choose to participate in Basic Camp, which is a stepping-stone to prepare for their next training event which is Advanced Camp.

Basic Camp is comprised of events similar to Advanced Camp. Cadets are tested in marksmanship, which consists of basic rifle knowledge and qualification with the rifle, confidence courses such as CBRN and the obstacle course, land navigation, a 10k ruck march, and field training exercises, where they learn how to move tactically and run missions based on Army doctrine. However, they also learn the basics of Army life and the way things are done. 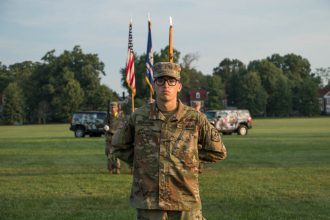 Basic Camp teaches Cadets drill and ceremony where they learn how to move in both large and small groups. They are also taught how to properly address and interact with enlisted soldiers and officers.

“I would say Basic Camp is really important because you get an idea of the rigor that will come at Advanced Camp. And the discipline that Drill Sergeants help instill in us is really helpful,” stated Cadet Caleb Buchanan, Bradley University.

Cadet Buchanan said that one of his biggest takeaways was how Basic Camp really focuses on bringing people together from many different places and making them work together. “You form really close bonds with people that you’re with for 31 days.”