Fort Knox, Ky.- For many Cadets, Camp may be the first time that they have had exposure to any type of Military training. However, for others, they have acquired skills from special schools that set them apart from their peers. Cadets from 1st Platoon, Alpha Company, 9th Regiment, Advanced Camp are proud to talk about their prior work within the Military. 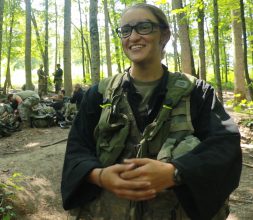 Cadet Hannah Gillan, Virginia Military Institute, explained SERE [Survive Evade Resist Escape] school and how it felt  being a Cadet attending such a tough program. “I didn’t know what to expect the entire time,” started Gillan, “easily the most rewarding and valuable training that I’ve ever gotten that I hope that I would never have to use.”

Although Gillan was very limited with the amount of information she was able to give out, she said that she thought about her family throughout training. “I want to be a role model for my brother and sister,” Gillan expressed, “I want to be a pilot and my sister wants to go Air Force, so I know this is a training we will eventually need.”  The three week course conducted in Fort Rucker, Alabama taught her how to survive alone in the wild, evade capture and return home. 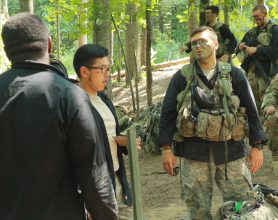 Cadet Michael Galligan, Florida Atlantic University, explains a mission to his squad members during an FTX on August 4, 2018. Photo by AJ Barnes.

Cadet Michael Galligan, Florida Atlantic University, has earned his airborne wings prior to attending Advanced Camp. A three-week course in Fort Benning, Georgia that would test a Soldier’s attention to detail and to trust their equipment as they attempt five jumps from an airplane. Galligan revealed how the APFT [Army Physical Fitness Test] would be the one event that would send people home.

“The two-mile run would get people,” said Galligan as he talked about the APFT, “additionally you have to do the flexed arm hang to measure the strength to hold the [parachute] risers down, and there were four-mile runs that you couldn’t fall out from.” Lastly, Galligan mentioned the importance of singing cadences while doing the four-mile run. “If you didn’t sing cadence, they will give you a SPOT report, too many SPOT reports will get you removed from the course.” 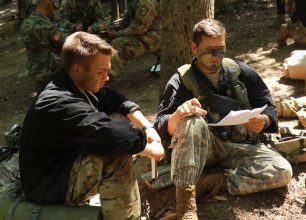 Another special skill that can be earned at Fort Benning, Georgia would be Air Assault. Benjamin Pritchett, Appalachian State University explained how the 10-day course for repelling out of helicopters was both fun and nerve wrecking.

“It started off with PT most of the mornings, but it wasn’t anything too hard,” Pritchett explained as he reminisced. “A lot of rifle PT, but the most physical things were the obstacles courses and two-mile run which was kind of a stressor.”  Lastly he added, “During the repelling phase, a lot of people were taken out for little things like safety violations.”

In all, all three Cadets highly recommended for Cadets to utilize their free time and inquire about any schools that offer special skill sets. The trio enjoyed telling their stories to their Battle Buddies and encourage everyone to challenge themselves when the opportunity presents itself, no matter how rigorous a course may be.

Trusting in Your Battle Buddy