FORT KNOX, Ky. – 8th Regiment, Basic Camp Cadets competed in a Drill and Ceremony Competition Aug. 7 during Cadet Summer Training at Fort Knox, Ky. Platoons competed against one another to earn the title for best movement.

Drill and Ceremony is a long-held tradition in the Army and focuses on Soldier movement.

8th Regiment, Basic Camp Cadets compete in Platoons against one another in a Drill and Ceremony Competition August 7 at Fort Knox, Ky. during Cadet Summer Training. Photo by: Madison Thompson

“We have everybody up in their straight lines doing parade rest, attention, correcting salutes, and making sure that our whole formation is on cue. We’re all competing with the different platoons to fight against whoever is the best at being all squared away and tight and straight,” explained Cadet Alisha Conway, University of South Alabama, (hometown) Seattle, Wa.

“There’s a lot of history behind it. It’s a way for you to pay respect to where this Army has come so far. It’s something that will always be done,” said Cadet Matthew Suder, James Madison University, (hometown) Leesburg, Va.

Drill and Ceremony can be difficult to execute depending on Cadets’ familiarity with platoon movement.

“It can be tricky. It’s just making sure you listen to whoever the PL or PSG is in the front calling out the commands. We’ve all been trying to practice and be uniform. You have to make sure you know your left from your right,” said Conway. 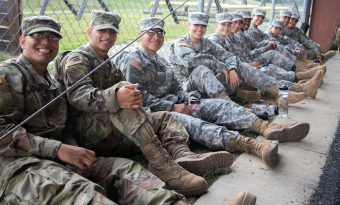 8th Regiment, Basic Camp Cadets observe one another compete in Platoons against one another in a Drill and Ceremony Competition August 7 at Fort Knox, Ky. during Cadet Summer Training. Photo by: Madison Thompson

Cadets must rely on one another, as well as maintain focus throughout the competition.

“You need to focus everyone and think that you’re not the only one. You need to think as a whole platoon,” said Cadet Angel Falu, University of Puerto Rico at Mayaguez, (hometown) Rio Grande, P.R. “The things you do, you do for everyone. You need to think like a family here. If someone falls, you don’t need to get angry with them. Just say, ‘hey, you’re doing great,’ and move on.”

Cadets provide advice and suggestions for future regiments who will come to Cadet Summer Training.

8th Regiment, Basic Camp Cadets compete in Platoons against one another in a Drill and Ceremony Competition August 7 at Fort Knox, Ky. during Cadet Summer Training. Photo by: Madison Thompson

“My advice is to always pay attention, even if you think it’s nothing that’s major. Be willing to learn no matter what. You might learn things from your school, but there’s always something to pick up on and to better yourself,” said Cadet Talisa Sherman, Jackson State University in Mississippi, (hometown) Richland, Miss.

“One piece of advice I can give is be disciplined and be respectful to your drill sergeants and your platoon and squad too,” added Falu, “Be proud. You’re doing something good and you need to think that when you go back to the real world.”