Fort Knox, Ky.– As Cadets from 8th Regiment, Basic Camp filed into Smith Gym to take Platoon pictures, many of them opted for a cause that is rewarding in itself. The Armed Service Blood Program [ASBP] is an internal organization with the Department of Defense that takes blood donations and distributes it to those in need within the Armed Forces community. 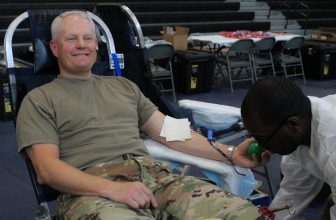 While seats were filled with many Cadets volunteering to have their blood drawn, there was a special guest that caught their attention. Major General John Evans Jr., Commanding General, U.S. Army Cadet Command and Fort Knox decided to share a few words with the Regiment.

As Evans discussed real scenarios of how blood has helped his officers while in combat, he revealed to the Cadets that he himself would be participating in the donation process. “Thanks for doing what you did today, and thanks for stepping up,” said Evans after sharing his personal anecdote.

As Evans moved swiftly for prescreening, many Cadets observed the seasoned Soldier and admired him for his leadership. Anna Drapau, University of Idaho, witnessed the event and called it amazing. 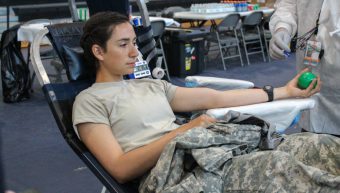 Drapau was more excited to see the general officer sitting near her as she discussed the event taking place. “It’s definitely amazing to meet the CG and his rank is so high that he has accomplished so much in life,” she said. “We are all here for the same reason, to give blood, and we are all either in the Army or aspiring to be in. It’s humbling to see such a high rank doing what we are doing.”

As Drapau was squeezing the pressure ball, she discussed what giving blood meant to her. “I’ve given blood before and I thought that it was a great way to help people that need blood,” she also added, “It means a lot because it’s a part of a family that I’m choosing to be a part of when I graduate school. I think its a good way to give back.”

“We like to take care of our soldiers, airmen, sailors and marines with blood products that we know are reliable so that we don’t have to worry about contaminants,” explained Evans as enlisted medical personnel were preparing their equipment. “It’s important to have strategic supply to rely on and that’s what ASVP does for us.” 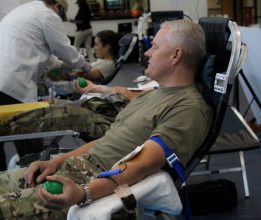 Evans also discussed why this cause is very near and dear to him.”It’s incredibly important to me, having served in combat multiple times, I’ve seen the requirement that we have for blood product on the battle field,” he began, “When people get to the level of care where they are receiving transfusions, the ability for us to have blood product available so that they can transfuse and then move to the next level of care is critical.”

Lastly, Evans explained how this is a great platform for future leaders. “I want to provide an example for the Cadets today, but also I want to be able to pitch in a little bit myself. Being a leader in the Army, it’s about selfless service and I can think nothing more selfless than giving blood to help others. The life they save may be the person sitting to their left and right, or maybe even themselves.”