Gold Bars at the end of the Tunnel

FORT KNOX – 8th Regiment, Advanced Camp was given the honor of being the last group of Cadets to be commissioned during Cadet Summer Training, Fort Knox, August 8, 2018.

The warm lighting of Waybur Theatre and the polished notes of the Army brass band set the tone for this momentous step in the lives of these three women and seven men.

This End of Camp Commissioning comes as the last hurrah for these 10 new second lieutenants. 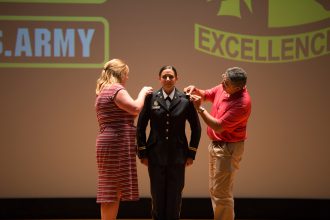 Maj. Gen. John R. Evans Jr., Commanding General of Cadet Command and Fort Knox, was the guest speaker at the commissioning ceremony and reminded the Cadets of a pivotal realty. Telling them that they will, at some point in their military careers, be asked to make decisions with no clear answer, and may fear the consequences. But their training has, and will continue, to prepare them.

2nd Lt. Erika Castillo, The University of Toledo, said her success and her newly earned rank as a second lieutenant was all for her parents, who had the honor of pinning her gold bars during the ceremony. 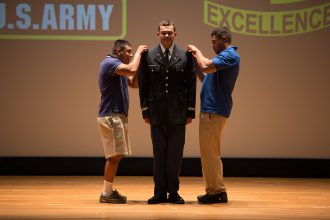 “What it means to me to get these gold bars is my parents and my family and my support system,” she said. “Because without them I would never be where I am today without them.”

Conventional families weren’t the only ones pinning shoulder boards today. 2nd Lt. Nicholas Castro’s (Washington State University) battle buddies from his camp pinned his shoulder boards for him during the ceremony.

“They are my buddies, my battle buddies,” he said, “the ones that went through [Advanced Camp] with me.”

They took their oath, received their gold bars, gave their first salute and presented a silver dollar to the first Soldier to salute them. With commissioning for these bright-eyed lieutenants over they will go on to their follow-on training or on to their civilian careers and begin to serve their nation.

A Pool of Laughter – and Mud