FORT KNOX, Ky.—9th Regiment, Advanced Camp, completed their last required event prior to their graduation: the 12-mile ruck march. Despite the early morning Kentucky humidity and heat, Cadets lined up to complete the event. 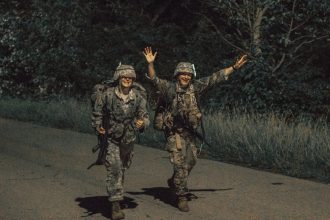 “It’s the last big thing we do before we graduate. It was tough, we got up at like 1:30am but we got through it,” said Cadet Joshua Bell, Liberty University.

Even though the 12-mile ruck march is the last thing that Cadets do prior to graduation, most Cadets say it is one of the most physically and mentally demanding aspects of Advanced Camp. Cadets ruck through some of the steepest hills and terrain that Fort Knox has to offer.

The mental fitness and toughness needed to push through the ruck is where many people start to fall out of pace and fall behind. However, Cadet Bell said that his battle buddy was a major help to him to push him to keep going and finish with the first group, which completed the ruck right at the two-hour mark. 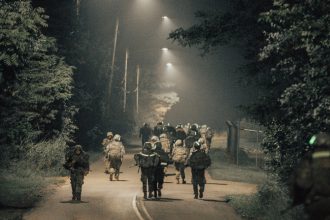 Along with Cadet Bell, about 15 other Cadets from 9th Regiment completed the 12 –mile ruck march right at the two-hour mark, and the Regiment had one Cadet complete all RECONDO requirements. For a Cadet to receive a RECONDO award, they must get a first-time go on all confidence courses as well as first –aid training, qualify with a 36 or better out of 40 on the rifle range, complete the 12-mile ruck in under three hours, receive a 90 or better on the written land navigation exam and find 4 of 6 total land navigation points.

“You need to be physically fit and mentally tough. The halfway point is when you start to feel the pain so you really need to push through,” explained Cadet Danel Soto, University of Puerto Rico at Rio Piedras. “What pushes me is the need to win, I want to be first. But the motivation is different for everyone.”