FORT KNOX, Ky. – In Randy Pausch’s autobiography “The Last Lecture,” a chapter titled “An Injured Lion Still Wants to Roar” depicts how, despite the setbacks that came with illness and injury, the famous Carnegie Mellon professor continued to do what he loved while following his childhood dreams.

Unlike her nearly 300 fellow Cadets that have called 8th Regiment home for the past 31 days, this is Bond’s second time to Fort Knox to complete Basic Camp.

“Last year I came here as an ECP (Early Commissioning Program) Cadet and my scholarship was contingent on finishing Basic Camp,” said Bond.

Two weeks into her time at Cadet Summer Training 2017, Bond broke her ankle during an obstacle at the Team Development Course and was unable to continue Basic Camp. 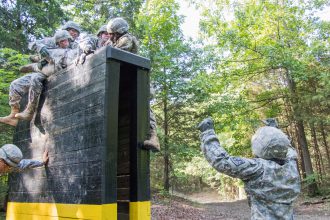 Pictured is the wall at the Team Development Course in which Cadet Calista Bond injured her ankle. (Photo by Emily Peacock)

“It didn’t feel real,” admitted Bond. “I knew I wanted to be an Army Officer since the age of 13 – this was my dream.”

Because her scholarship was contingent on her ability to complete Basic Camp, Bond was unable to return to Valley Forge for her MS3 year.

Although she was devastated to have lost her scholarship, Bond was determined to see Basic Camp through and continue on her path of becoming a future Army Officer.

“My initial instinct was that I wasn’t going to let this stop me and my goal of being an Officer,” said Bond. “I talked to my PMS who told me to stay in shape, keep educating myself and to come back stronger than I did when I initially got to Basic Camp.”

During her year away from Valley Forge, Bond kept herself on track by getting in shape, earning her EMT license and even working for a local police department as a dispatcher. In the end, Bond would have to re-compete for her ROTC scholarship at Valley Forge. 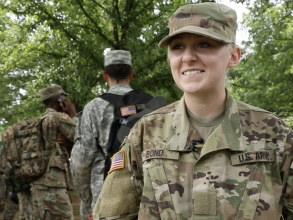 After proving not only to herself, but her university, that she was faster, stronger and wiser than she had been when she first arrived to Basic Camp in 2017, Bond received her scholarship as well as her regimental dates for Cadet Summer Training 2018.

Although more confident in her abilities this time around, Bond was anxious for her return to the Team Development Course.

“It was definitely nerve-racking for me,” said Bond. “It was one of those things that I knew I could accomplish, but I was very hesitant.”

“But Basic Camp teaches you to overcome your fears and to help you become a stronger person, and this was just another obstacle I needed to push through.”

Not only did Bond maneuver every obstacle the Team Development Course threw at her, with every bone intact, but today Bond completed Basic Camp – an accomplishment one year in the making. 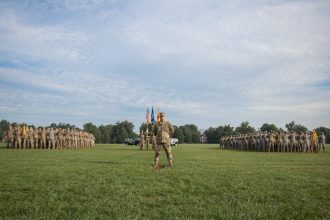 “It’s a great accomplishment,” beamed Bond. “I’m very happy to be able to say that I have finished Basic Camp and that I’m going back to school.”

As she says her final farewells to the friends she’s made during her 31 days at Fort Knox, Bond can’t help but feel overwhelmed with emotions at the thought of returning to school and carrying on her childhood dream of becoming an Army Officer.

In just four short days, Bond will return to Valley Forge where she will complete her MS3 year and prepare to return to Fort Knox for Advanced Camp in 2019.

“Experience is what you get when you didn’t get what you wanted. And experience is often the most valuable thing you have to offer.” – Randy Pausch, “The Last Lecture”

We’re All in This Together