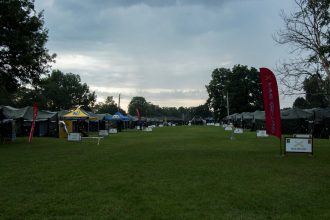 FORT KNOX, Ky. – Cadets of 9th Regiment, Advanced Camp spent the morning at Keyes Park, exploring all the different branches that the Army has to offer. The point of the Army’s take on a job fair, is to educate and enlighten the young Cadets so they can feel as confident as possible when creating their list of branches in the coming days.

Just as this morning’s rain promised growth and new beginnings, so did Keyes Park for the Cadets of 9th Regiment. With over a dozen different branches to choose from, creating that dream list can often be challenging and scary. It’s not commonplace to have your future so perfectly planned out, especially at this point in many of the Cadets lives. However, with Cadre who are specialized in each of the specific practices leading the way, the Cadets can pick the brains of people who have “been there, done that” as they inch closer to making those fruitful leaps. 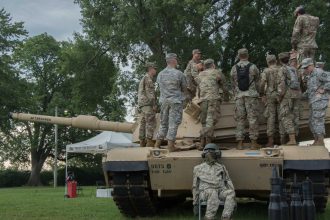 Cadets of 9th Regiment, Advanced Camp getting up-close and personal with some of the interactive displays during Branch Orientation. Cadet Summer Training 2018 (Fort Knox, Ky. August 11) Photos by: Jakob Coombes

Many Cadets come into Brach Orientation with a set mind on what they want to do in their Army careers. Although that is great and they will be given the opportunity to learn all the nitty-gritty that comes with that specific field, Cadet Alexandra Goldman, The Citadel, offered some important advise.

“I think you should always keep an open mind, especially when it comes to something like this. You might not think your interested in a certain field, but go and check it out anyways. That’s the whole reason why we’re here, go try something new.”

The smiling faces of Cadets as they walk from tent to tent, seeing all the impressive displays and vehicles, speaks volumes to the importance of events such as Branch Orientation. Even though the Cadets might not know it now, they will soon find their niche in the giant that is the United States Army and be a part of something bigger than themselves. Today can be nerve- racking for some, but the skills and information learned is worth its weight in gold. 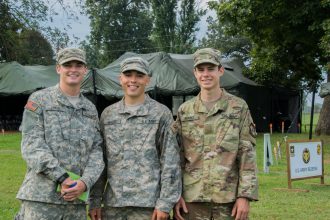 Cadets of 9th Regiment, Advanced Camp spend the morning at Keyes Park, learning about the different Military branches and what they have to offer. Cadet Summer Training 2018 (Fort Knox, Ky. August 11) Photos by: Jakob Coombes

“Don’t be afraid of change, it is leading you to a new beginning.”

Sweat and Tears from 64 Ft.