FORT KNOX, Ky. – Cadet Summer Training 2018 came to a close today as the Cadets of 10th Regiment, Advanced Camp graduated in front of family and friends. The ceremony took place in Natcher Gym, which allowed for booming echoes as the Cadets sounded off and sang proudly. The atmosphere created was the perfect way to cap off this year’s summer of training. 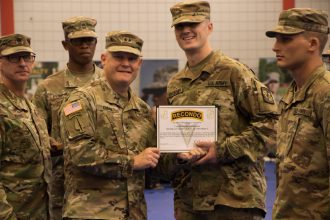 Maj. Gen. John R. Evans, Jr. took the microphone for the last time this summer to address the Cadets and guests. He spoke of the right of passage all these Cadets had just made it through, and the long lineage of brave men and women they would soon be joining. Before stepping back into the crowd, he closed with an important piece of advice to the young Cadets saying, “These people here with you today, especially the parents, are your support system. The older I have gotten, the wiser I’ve realized they are.”

The ceremony would continue with the presentation of awards. 10th Regiment was a star studded group with 13 award winners and two RECONDO award winners, Cadets Patrick Stein from Texas A&M and David Eychaner out of Michigan Technological University. Distinguished guests, either retired veterans or honored civilians, presented the awards. 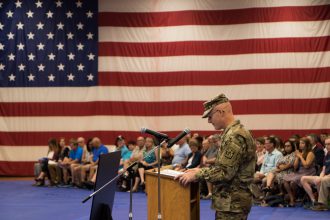 Guest speaker Col. Timothy Brown delivered a speech that talked of valor, courage, and commitment to both the nation as well as to each other. He highlighted Cadet Matthew Blackburn from Virginia Tech University, whose brother passed away unexpectedly while Matthew was working his way through camp. When given the option to leave early, Matthew chose to stay with his comrades and power through Advanced Camp stating, “This is what my brother would have wanted.”

The Cadets closed the ceremony with the singing of the Army song. The parents and guests were treated to the loudest and proudest presentation of the song; in part due to being in the tight gym as well as the Cadets running through multiple takes until the Cadre felt it was suitable to close this summer’s training. The extra practice was worth it, as the crowd’s faces lit up and the Cadets were met with thunderous applause at the song’s conclusion. 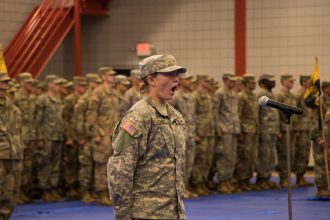 As the Cadet’s say goodbye to Fort Knox, they take that vital step towards the next stage of their Army careers. The proud faces of family and friends make the month-long challenge worth it for the Cadets. The majority will soon go back to their campuses and help guide a new class of ROTC/Army hopefuls; one groups’ chapter comes to an end as another’s soon begins.

The Supporters of Cadet Summer Training: A Story on Cadet Xanthus Manglona

The Motivation of a Squad