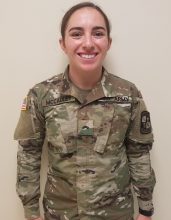 Cadet Kellie A. McCauley, a highly motivated MSII, has found lifelong friends and a career path with University of Cincinnati’s Bearcat Battalion.

Cadet Kellie McCauley is an extremely driven and highly motivated MS II who, through her determination to succeed and confidence, is an example of a present and most qualified junior Cadet with the potential to exceed standards and become an exceptional officer. Cadet McCauley began the semester immediately knowing that her future lied within the Army. Within a matter of two months she gathered and completed all documents to include 104-R, insurance, 139-R, DODMERB physical and with a GPA 3.8 solidified her position to receive a 2.5 year scholarship. Cadet McCauley had the mental agility to understand the importance of making a decision to commit her life to the armed services and, without hesitation, worked diligently to secure her standing for a scholarship. Her discipline in and out of ROTC, as well as her willingness to go the distance in reading and demonstrating her proficiency in Army doctrine and tactics, is nothing short of exemplary and the model for what we expect from an Army ROTC Cadet and future officer.

I am involved in the Army ROTC program because of the benefits of being a Cadet at the University of Cincinnati. I do not think there was any specific moment in my life where I was like “Oh! I totally want to join the military!” My family can attest to the fact that I grew up wanting to be a Soldier in the armed forces all my life. I still cannot pinpoint why I wanted to join the Army, but something inside me told me it was the right step and I have not looked back since! The Bearcat Battalion has given me lifelong friends and skills, in addition to a career in the Army once I commission. I take great pride in wearing the Army uniform and I am very motivated and proud to serve my country, as many have done before me.

From Physical Training to Triathlete