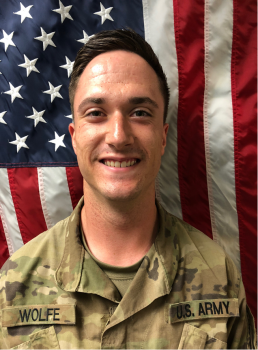 Cadet Kyle Wolfe is part of the Ranger Challenge team for the Bear Battalion at Baylor University.

Kyle Wolfe is the number one Cadet in the Baylor Bear Battalion. Consistently ranked at the top of his class by his peers, Cadet Wolfe competently and faithfully displays all the virtues of an excellent leader. As a member of the Baylor Ranger Challenge Team, Cadet Wolfe has been a reliable member of a dedicated team and has competed in several Ranger Challenge Competitions. Moreover, as a member of the greater Bear Battalion, Cadet Wolfe has taken it upon himself to extend his influence beyond the chain of command, going out of his way to engage with and mentor several of his younger peers. Despite missing the first week of the semester due to his participation in, and completion of, the Fort Hood Air Assault School, Cadet Wolfe proved to be an immensely reliable and indispensable asset for planning the Bear Battalion Fall Field Training Exercise. In conjunction with Bear Battalion Cadre and his fellow Cadets, Wolfe took the lead on FTX planning, successfully executing a three-day training event that included air movement to Fort Hood and a capstone 12-mile ruck march. Kyle Wolfe is also engaged in a number of activities within the Battalion, which included spending a weekend to travel to Washington D.C. and compete in the Army 10-Miler. In sum, Cadet Wolfe leads by example and is a positive role model for all his peers to emulate. Through his hard work and determination, Cadet Wolfe has gone above and beyond the normal call of duty and has displayed excellent leadership abilities.

In the Cadet’s Own Words:

I did not come to Baylor University with a ROTC scholarship, and in fact, I never had the intention of joining ROTC in the first place. I wasn’t one of those kids who grew up saying that they wanted be a soldier. Rather, I felt a sudden call to service. After much prayer and thought I decided I would give it a shot, so I walked into the school’s ROTC Headquarters and spoke with the recruiting officer at the time. I was told to show up the next day for the individual movement techniques lab. At the time it seemed appropriate for me to wear athletic shorts and a t-shirt for this since I hadn’t been issued a uniform. Quickly, I learned that this was not the best idea, but that lab gave me a sense of excitement that was unfamiliar to me at the time. I understood from that moment that the path ahead of me would not be easy, and at times it would be painful. But I understood that I was going to be doing something that challenged me and would give me an opportunity to a serve something greater than myself.

From then on, I was dedicated to finding the next thing to challenge myself with, the next obstacle I could overcome in order to be a better servant/leader to my peers. That first step for me was enlisting as a 68W. I knew that eventually I would probably want a career in the Army, and it would probably be medically related in some way. I also knew that commissioning from ROTC, I would know very little about the enlisted side of the house. So, going to BCT/AIT seemed like the most effective opportunity I had to better myself quickly as an uncontracted and ill-experienced Cadet. Initial Entry Training taught me that integrity is everything, and discipline is the surest way to prepare self. The experience also gave me a hunger for finding new limits to what I could make myself do both physically and mentally.

Upon my return to Baylor University and contracting with the ROTC program, I decided to join the Ranger Challenge team. I had never worked with such close-knit, driven individuals. It is through them that I learned to push my body beyond what I had thought it was capable of doing. It is because of the Ranger Challenge team that I was motivated to pursue many physical challenges such as consistently maxing my APFT, competing in the Army Ten-Miler this past September, and the Bataan Death March two years in a row. I was also blessed with the opportunity to achieve the gold standard of the German Armed Forced Proficiency Badge and graduate Air Assault School. Had it not been for this niche community, I would not have been equipped with the resiliency to endure these trials.

The most important lesson I have learned thus far can be summed up in the words of St. Paul, “Live in harmony with one another. Do not be haughty, but associate with the lowly. Never be wise in your own sight.” This was demonstrated to me by our last Professor of Military Science, who humbled himself to come alongside Cadets and provide mentorship. While keeping his professional bearing, he always made Cadets feel welcome and took great care in getting to know them personally and investing in their growth. In doing so, he inspired me to reflect on my own leadership style by taking the skills, talents and abilities that have been afforded to me in order to serve those around me.

Hand Grenade Familiarization: “The more they push you, the more you want to make them proud.”