FORT KNOX, Ky.– Today Cadre processed incoming Cadets who are here for the 1st Regiment, Advanced Camp. The Cadets started by going through all of their belongings to make sure they had everything required. Cadets who had items missing were sent to the Central Issue Facility (CIF).

2nd Lt. Tyler Sisson from Enterprise, Al. said inprocessing is important to have a successful summer. It lasts about two days, and this is also when Cadets learn who are in their companies and platoons. 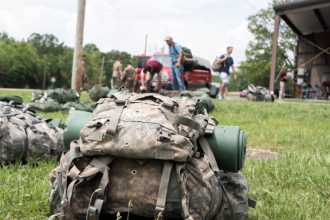 If Cadets do not have all of their gear, “it could harm their capabilities when they are out in the field,” Sisson said. He also said that he is excited for CST this summer.

Sisson, a newly commissioned second lieutenant, was here for Advanced Camp last year and returned this year as part of the Cadre. He is looking forward to “the hand grenade range and the buddy team live fire.” These trainings are new for the Cadets this summer.

Sisson’s family has been in the military for as long as he remembers so joining himself was second nature for him. Seeing his parents in the Army gave him a sense of desire to join, as well.

To prepare to train Cadets, the Cadre did a week of Observer Controller/Trainer Academy (OCT) training. This training replicates Advanced Camp training for the Cadre.  Cadre have also taken leadership classes and learned how to write blue cards, blue cards are used to evaluate Cadets during their trainings when they are put into leadership roles, something Sisson, as a new officer, is nervous about.

Sisson hopes to be a good example for the Cadets this summer and gain leadership experience. He also hopes to learn some good Army and tactical knowledge for when he goes to Basic Officer Leadership Course (BOLC). 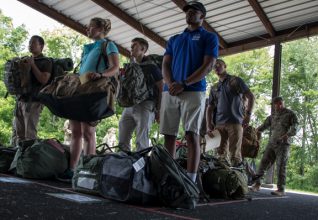 Cadet Natalie Rodgers from Rock Hill, N.C. went to The Citadel, and plans to commission as a second lieutenant at the end of CST. Rodgers said she has a lot of training ahead of her. She is very motivated and looking forward to cohering with her platoon.

Rodgers said she is most nervous about the Rappel Tower, because “me and heights do not get along too well.” Even though she is going to have to “mentally get over” her fear, she is still looking forward to it.”

Rodgers said The Citadel did a great job at preparing them for CST. “We actually did an additional training camp at the end of the school year, right after our graduation and the end of our year.  We went out in the woods of Fort Jackson in South Carolina, did a bunch of training, did a bunch of rucking.”

Her grandfather, who was a tanker, is an inspiration to her and a part of the reason why she decided to join.

Cadet Isabella Rosa from Getzville, N.Y. attends the College at Brockport, State University of New York. She, too, is nervous about the Rappel Tower, because she is uncomfortable with heights.

When asked what she was looking forward to most this summer, she said, “Becoming more confident in myself, being a little more outgoing and being forced to work with people I am not used to working with.”

She comes from a military family and has family in just about every branch. Her school has helped train her for CST and she has also mentally prepared for training. 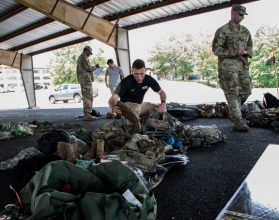 He is looking forward to the leadership aspect of CST. Cannon is nervous about the gas chambers, because “I have done it before and did not like it.”

Cannon said he is looking forward to the getting a better idea of who he is as a leader and to see how he operates under stressful situations.

CST will last 37 days and the next round of Cadets will be arriving Wednesday, May 29.

So Many Branches… A Cadet’s Career Choice