FORT KNOX, Ky. – This summer there will be several special events and ceremonies taking place at Fort Knox highlighting the success of thousands of U.S. Army Cadets.

Cadets will reunite with family members on Family Day, discover the 17 different branches of the Army during Branch Orientation and proudly graduate on Graduation Day. Previously, Fort Knox hosted a commissioning ceremony for the Cadets. This year, the commissioning ceremonies are taking place at their universities instead. Each of these ceremonies are rooted in years of tradition.

“The Army has just always been the marching bands, the National Anthem, the flying of the flag, all of those,” he said. “It’s all about tradition and carrying on that tradition.” 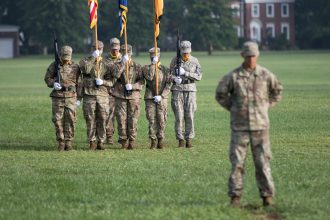 8th Regiment, Advanced Camp Cadets bow their heads during the invocation of their graduation from Cadet Summer Training Aug. 9 on Brooks Field at Fort Knox, Ky. Photo by: Madison Thompson

It takes a team of several people to run these special events and ceremonies to ensure the tradition continues. Months of hard work and dedication are involved to carry on the decades of history that is displayed.

Mick Chiara, chief of protocol for U.S. Army Cadet Command, said there is much to do on the day of a ceremony. For graduations, Chiara and his team must label seats, check the VIP list, prep the narrator, seat the guests and more to ensure the ceremony runs smoothly.

After each event, they will do an after-action review to reflect on what went well or what could be improved. According to Olson, there will only be slight changes to the events this year compared to previous years. Any changes made are meant to keep the audience content without giving up any traditional aspects.

Even with the many CST graduations, family days and branch orientations this summer, each event is equally important. 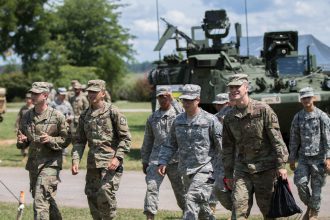 Olson said graduation day is especially significant for all Cadets who come to Fort Knox for CST.

“Once they’ve crossed the field, they know that they have successfully passed Cadet Summer Training because their next step is commissioning,” Olson said. “That is the ultimate goal for every Cadet that comes here.”

Graduation ceremonies are important to the families of Cadets as well. Seeing their children cross the field during graduation can be very emotional for parents.

Chiara said all visitors who come to Fort Knox are considered “distinguished visitors” to him and his team. Whether it’s the youngest sibling of one of the Cadets or a high-ranking officer, they try to make the visit as pleasant as possible. All special events and ceremonies at Fort Knox strive to achieve the mission – Making Positive Army Memories. 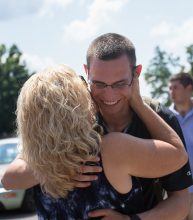 “A lot of folks say the ceremony, especially the graduation, is for whoever is the guest speaker,” Chiara said. “Well, it’s not true. It’s for the parents. It is to mark the accomplishment of the Cadets who are marching on the field, but it’s also for the family in the audience.”

Positive Army memories can be from the Cadets’ personal experiences during their time in training or by those of the families who visit Fort Knox.

For many families, visiting this Army base can be their first encounter with the U.S. Army. It’s important to make a great impression on all who come to witness the legacy of an Army ceremony.

Back to the Basics