FORT KNOX, Ky. — “CBRN stands for chemical, biological, radiological and nuclear, so what we’re training these cadets here to do is to react primarily to a chemical and biological attack,” 2nd Lt. Johnathan Marcelli said about CBRN training.

Marcelli is a recent graduate and commissionee from Wright State University, Dayton, Ohio. He will be joining the 59th Chemical Company in Fort Drum, New York. He is one of many who have traveled far and wide to train this year’s Cadets. 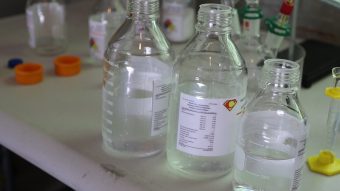 Vials from the mock-up lab are scattered across a table. Photo by Luke Heibert, CST for Public Affairs Office

CBRN training takes Cadets through a few different stations, including a hands-on teaching session that covers eight critical tasks, a mock-lab walk through that displays scenarios to be aware of and a confidence chamber in which the cadets will be exposed to CS gas (what most know as tear gas). The training takes about four hours.

Pvt. Ivan Reigoza, from the 110th Chemical Battalion at Joint Base Lewis-McChord, Washington. Reigoza works as a tech escort with Cadet Summer Training (CST) on the CBRN range.

“We have individual training on how to don your masks, your JSLIST and different tools like a marking kit,” Reigoza said.

There’s a whole plethora of equipment these Cadets will be exposed to. The gas mask, JSLIST (Joint Service Lightweight Integrated Suit Technology) and the marking kit are only the tip of the iceberg.

The Cadre training CBRN have an unlimited supply of tools to help in field missions, which are covered in the basics of CBRN training. A primary goal for CBRN training is to instill confidence in their equipment within the Cadets. Any equipment they could run into in facing CBRN combat, these Cadets will gain a certain confidence in them, says Reigoza.

New to the training this year is a demonstration of CBRN equipment in action. 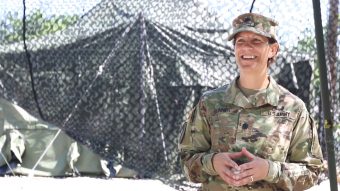 Lt. Col. Skinner, PMS for the University of Southern California and Chief of the CBRN range, tells us about CBRN. Photo by Luke Heibert

“The first thing that they [the Cadets] do is they get to see a tech-escort demonstration from our CBRN subject matter experts,” Lt. Col. Laura Skinner, professor for military science for the University of Southern California and chief of the CBRN range for Cadet Summer Training, said.

Skinner says this is a welcome change, showing the Cadets what the CBRN core is about. This new demonstration is going to be eye-opening for many of the Cadets, says Skinner.

CBRN training is seemingly most well-known for exposing the Cadets to tear gas in the confidence chamber. Visions of Cadets coughing and spewing mucous flash across minds of military and nonmilitary alike when the word chemical is even mentioned. This should not be seen as the primary focus of the training, though, Skinner stresses.

“Though the CS chamber is the culminating event here, it’s not the primary event,” Skinner said. “The primary event is everything else that they’re doing and learning, the eight soldier’s common tasks that they need to survive in a CBRN environment.” 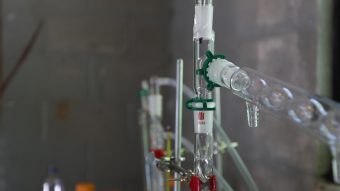 The mock-up lab is made as realistic as possible. Photo by Luke Heibert

Certain training events for Cadet Summer Training are “must-pass” events – events that the cadets have to complete in order to succeed at basic camp and advanced camp. CBRN requires that every cadet remove their gas mask and pass their eight task tests in order to move forward with training.

Not only is CBRN a pass or fail event, but it is also a RECONDO event for Advance Camp. Going RECONDO is something most cadets strive for but is an honor few earn. It means that those cadets have displayed superior skills in their time at camp.

If a Cadet is able to mask in nine seconds and can don their MOPP gear in eight minutes or less, they qualify for RECONDO at the CBRN site.

The Cadre training these Cadets know how daunting of a task that this event is; to voluntarily open oneself up to experiencing the pain of CS gas is seemingly insane. Friends, family and the American people hearing and seeing these Cadets’ stories and following their lives at camp can rest assured knowing that these events are necessary and performed in a safe environment.

“Understand that it may look really distressing seeing a bunch of young people come out of a chamber coughing and gagging and spitting and waving their arms, but also understand that it’s a necessity,” Marcelli said. “They need to learn how to deal with the very real threat that is chem-bio.”

Higher Ground: How to Succeed on the Road to Leadership