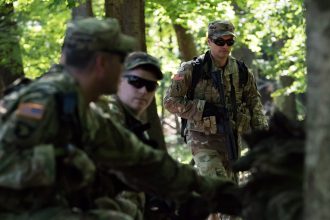 ROTC Cadre conduct a recon during a movement to contact exercise, Fort Knox, Ky., May 24, 2019. This exercise is a part of Cadre training before the Cadets arrive for Cadet Summer Training. | Photo by Kyle Crawford, CST Public Affairs Office

FORT KNOX, Ky. — Movement to Contact on its surface may seem like a fairly simple exercise but holds so much more for the Cadets and Cadre that participate.

Cadre that will be overseeing Cadet Summer Training (CST) Cadets took part today, May 24, 2019, in an exercise that tests a platoon’s ability to plan, move and execute a tactical military operation based on the information given by Cadre.

However, for the Cadre, it was also a time to learn how they will be scoring the CST Cadets on their performance in the exercise as well as leadership qualities they show.

Capt. William Israel, part of the Observer Controller Trainer Academy (OCT) and was overseeing the exercise, said that this exercise helps, “Get everyone on the same page. Make sure we have Cadre that are capable of using doctrine as their vehicle in order for them to assess and evaluate so they can provide feedback.”

This training will also hopefully remove all subjectivity from the evaluations, Israel said because, “If you have a bunch of people using their own subjective terms for what the attributes of competencies mean or they have a lack of knowledge of the step by step process from the Ranger Handbook. Then you have got a mish-mash of evaluations and it is extremely subjective.” 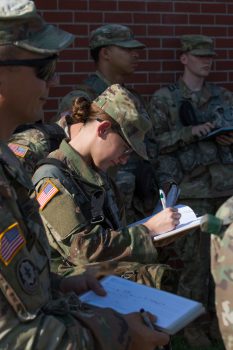 2nd Lt. Allison Hinton is a first time Cadre who had gone through CST here in Fort Knox, Kentucky, last year. She found the training was a good way to help get practice with the tactical exercises so the Cadre know what to expect with the Cadets as well as practicing evaluations and assessments of those going to be in leadership positions.

“As a Cadet you don’t realize how much preparation the Cadre go through,” Hinton said. “But I want to be prepared to be the best mentor I can to help them commission and be the best 2nd Lieutenant they can be.”

Dana Norris is a Major in the US Army, a newcomer to CST but is not unfamiliar with the training. He graduated from advanced camp in 1999 at Fort Lewis in Washington. He also spent 24 months as a basic training company commander where he assessed drill sergeants in their character competencies, leadership abilities, technical and tactical proficiencies. He has found that these experiences spill over into being a Cadre.

“I hope the cadets get realistic training, one,” Norris said. “Two, a wake-up call for them to understand where they’re lacking in their abilities.”

And throughout the Cadet’s time here at CST they will have the ability to keep growing and expanding on the training they receive during this exercise. 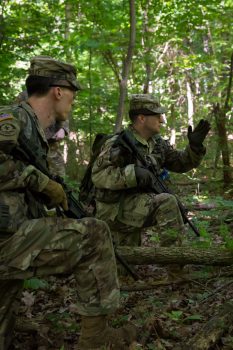 Capt. David Ayers (right), an instructor at the University of North Dakota, gathers a squad to carry out a shift of fire tactic during a movement to contact exercise, Fort Knox, Ky., May 24, 2019. Ayers operated as the platoon leader during the exercise. | Photo by Kyle Crawford, CST Public Affairs Office

After the mission concluded, Captain David Ayers, who was Platoon Leader during the exercise, found that overall the mission went very well. He said that this was a good refresher course on how this exercise is meant to be run which helps a lot for those that may be new to the cadre position or had forgotten the specifics.

He also said, “The Cadets will get a lot of teamwork out of it. Which is a big deal because they haven’t seen everyone before. And expertise development because one person can’t know everything and that one piece of information is within the group itself.”

Movement to contact may just be one part of CST, and to see the rest go to www.futurearmyofficers.army.mil.