The first APFT is a way to see if the Cadets are in top physical shape when they arrive at Advanced Camp. The Cadets will hopefully only have to take the test once, however, they will get the opportunity to re-test if they fail. The test covers these three events: push-ups, sit-ups, and a two-mile run.

Maj. Edward Adams, an ROTC instructor at Gonzaga University, said “We generally would like for them to just pass, but we would like to see a lot of maxed out scores.” To reach a max score you need 300 points, with each event being worth 100 points. 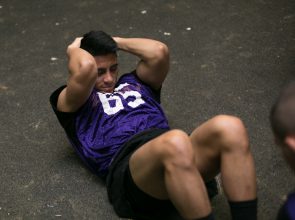 Cadet Brian Alegre, University of San Francisco, participates in the Army Physical Fitness Test, at Fort Knox, Ky. May 26, 2019. The exam tests Cadets physical endurance and is one of the first events they must pass to become Lieutenants. | Photo by Dustin Massengill, CST Public Affairs Office

Cadet Joshua Young, from Templeville, Maryland, and attends Bowie State University, said, “My goals for PT are to max out in every event that I can … and my Cadre at school did a great job preparing me to be able to do so.” Young said that he likes to use these tests to prepare himself for other events such as the ruck march.

A lot of Cadets pointed back to their ROTC programs as to why they feel prepared for the APFT. Emiliana Angola, from Princeton, New Jersey, and attends Clemson University, said, “I feel like I’ve been preparing since I was an MS1 with us doing a lot of training and tactics.”

She said that this training was helpful because “This process has been a little hectic and you need to get used to long days and working with different people.”

Brian Alegre, from San Diego, California, attends the University of San Francisco ROTC program. He said even though its only been a few days, he misses his family, but like with PT, you “just keep going.” 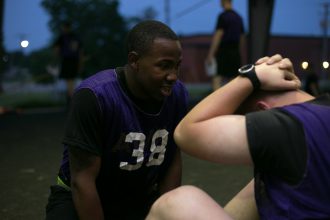 Cadet Michael Cammack, Old Dominion University, motivates his fellow Cadet during the Army Physical Fitness Test, at Fort Knox, Ky. May 26, 2019. The exam tests Cadets physical endurance and is one of the first events they must pass to become Lieutenants. | Photo by Dustin Massengill, CST Public Affairs Office

“Keep going” was a phrase that was heard multiple times during the PT test. One individual in particular was pushing his fellow Cadets as they went through their individual tests.

“My battle (buddy) looked like he was going to give out around 60 (sit ups). I pushed him for another 20. If he is within the age limit then he maxed out his sit ups. You can only do as good as your peers. That’s how I look at it,” said Cammack.

The Cadets are just getting started here at camp and seem to be in high spirits. They are all focused and excited for the tasks ahead.